The 2018 record season has come and gone!  Here’s a look at some of the record trends and individual catches that stand out from 2018.

Last year, the IGFA approved 355 record applications of which 43% were for freshwater species and 57% were for saltwater.  These records came from a total of 38 different countries, with the United States, Japan and Australia leading the pack with 136, 62 and 27 records, respectively.  In terms of popularity, freshwater species dominated last year’s records with rainbow trout, grass carp, common carp, bowfin and taimen ranking as the top five most popular species.

On the freshwater scene, taimen really stood out and Russia was on fire last year with six of the seven records entered for this species.   In September 2018, two anglers from the Wild Salmon Center (WSC) traveled to Russia and earned two very impressive records.  Guido Rahr, WSC President and CEO smashed the men’s 10-kg (20-lb) tippet record with a 37.7-kilogram (83-pound 4-ounce) fish that he caught while fishing the Tugur river on September 19, 2018.  Not to be outdone, his travelling companion Dr. Matthew Sloat, WSC Director of Science, broke the All-Tackle record with a 45.8-kilogram (101-pound) beast that he also caught while fly fishing.  Sloat was fishing with 20-kg (40-lb) tippet, which made his catch ineligible for an IGFA fly rod record.  However, had he been fishing with 10-kg (20-lb) tippet, he would have surely upstaged his friend and boss. 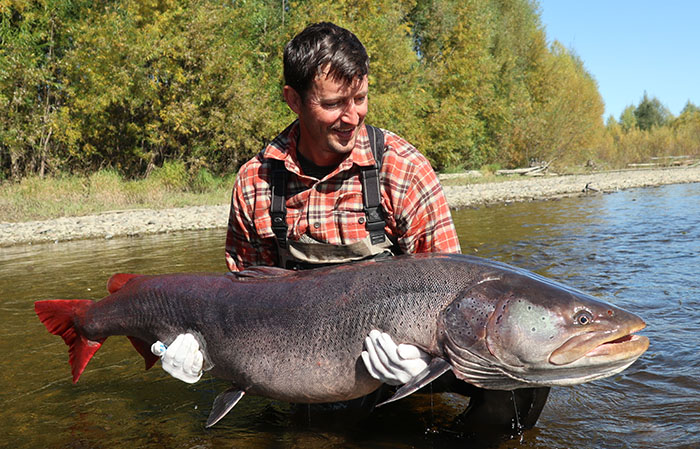 Other notable freshwater catches included Kazumi Odake’s 14.3-kilogram (31-pound 9-ounce) Papuan black snapper caught in the Wa Woi River that earned him the men’s 8-kg (16-lb) line class record.  While most snappers are marine species, Papuan black snapper reside almost exclusively in freshwater and are regarded as one of the strongest freshwater species of game fish.  Dorado are also an iconic freshwater fish and one of South America’s premier game fish species.  Four records were approved for this species and Dotty Ballantyne broke the women’s 3-kg (6-lb) tippet record with a 10.4-kilogram (23-pound) monster that nearly took her a half hour to best while fishing out of the Puma Lodge in Bolivia.  The All-Tackle record black crappie record caught in 2006 was beaten by nearly half a pound with a 2.47-kilogram (5-pound 7-ounce) behemoth that was caught by Lionel Ferguson in May 2018 while he was fishing Richeison Pond in Tennessee.  The All-Tackle Length world record for largemouth bass was tied by Angler Lance Jones with an impressive 65-centimeter fish that he caught-and-released on April 24, 2018, while fishing a live shiner on Lake Jeffery located in Lake City, Florida. 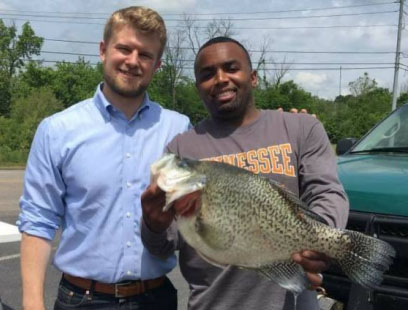 In May, 2018 Lionel Ferguson, right, caught the All-Tackle black crappie with this 2.47-kilogram (5-pound 7-ounce) behemoth

Several long-standing saltwater records held by legendary anglers were broken in 2018.  IGFA Trustee Gary Carter broke the men’s 10-kg (20-lb) line class record for Atlantic blue marlin with a 366-kilogram (806-pound 15-ounce) fish that he caught while fishing the fabled waters of Madeira, Portugal.  The previous record stood for nearly 30 years and was held by none other than former IGFA Trustee and IGFA Hall of Famer Stewart Campbell.  Another long-standing record was shattered when Nathaniel Linville broke the men’s 1-kg (2-lb) permit tippet record with a fish weighing 7.2-kilograms (16-pounds) that he caught in Key West, Florida.  The former record was caught in 1986 by permit fly fishing legend Del Brown who caught over 500 permit- more than anyone recorded in history- during his lifetime. 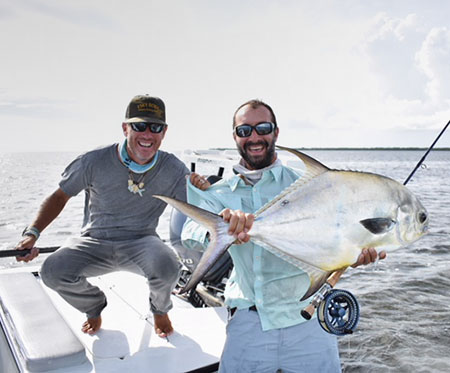 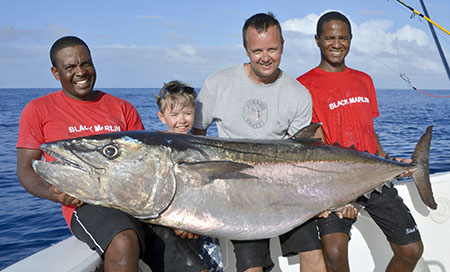 The IGFA’s Junior Angler records were launched in 1997 and have become very popular with young anglers.  In 2018, 33 Junior records were approved for species ranging from tiger trout to southern bluefin tuna.  In January 2018, 15-year-old Reece Rocket shattered the female Junior record for amberjack by over 30 pounds with a 39-kilogram (86-pound 9-ounce) fish she caught while fishing the Gulf of Mexico out of Texas.  The female Smallfry record for roosterfish fell to little Ava Sydney Thompson when she caught a 29.5-kilogram (65-pound 4-ounce) rooster during a trip to the world-famous Tropic Star Lodge in Panama.  Aussie angler, Tait Missen earned the men’s Junior record for southern bluefin tuna with a very impressive tuna that weighed in at 143.4-kilograms (316-pounds 3-ounces) that he caught while trolling out of Port Fairy, Australia.  And eight-year-old Rupert Mathis obliterated the men’s Smallfry dogtooth tuna record by almost 177 pounds with a whopping 89.5-kilogram (197-pound 6-ounce) doggie that he caught fishing off Rodrigues Island, Mauritius.

Sixteen All-Tackle Length records were approved last year for 12 species of fish.  Bonefish enthusiast Dr. Jan Forzpaniak made another pilgrimage to New Caledonia in October 2018 where, for the third time in a row, he was able to break his own record for this species with a 72-centimeter bonefish he caught while fly fishing.  The largest All-Tackle length record approved in 2018 went to Stan Konstantaras for a 148-centimeter southern yellowtail that broke the existing record by 10 centimeters.  The standing cutthroat trout record was bested by 4 centimeters by Adam Garcia when he caught a beautiful 85-centimeter fish while fishing Pyramid lake, Nevada in October 2018. 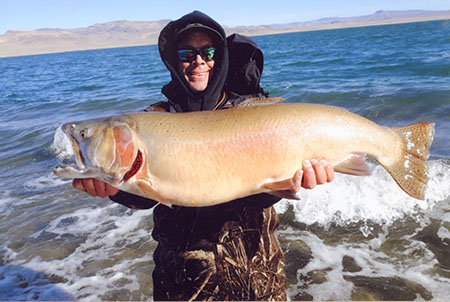 These are but a few of the outstanding records that were achieved last year.  If you haven’t already done so, take a tour of the record search on the newly launched IGFA website. The new website provides an enhanced user interface with even more search options and the ability to view all current and past records, as well as record statistics for individual record holders.

The 2019 record season is already underway.  Stay tuned for some exciting new record, slam and trophy club opportunities coming your way in the next several months!