The IGFA continues to make progress on its goal of strengthening its international network with the recent establishment of the South American Regional Council and the execution of the first Regional Meeting of the European and Mediterranean Council in Sardinia, Italy.

On May 25, 2019, 35 IGFA Representatives, Captains, Clubs, Members and guests from 11 different countries convened at the Yacht Club Porto Rotondo (YCPR) in Sardinia, Italy for the first European & Mediterranean Regional Council meeting since the Council’s establishment in December 2018. The primary focus of the meeting was on solidifying the council’s action plan and determining how to further the IGFA’s message of conservation, education and ethical angling practices across the sportfishing community in the region. Council Chairman and IGFA Trustee, Massimo Brogna, spearheaded the meeting discussions and encouraged attendees to be active participants of the council’s upcoming 2019 activities which include the following: 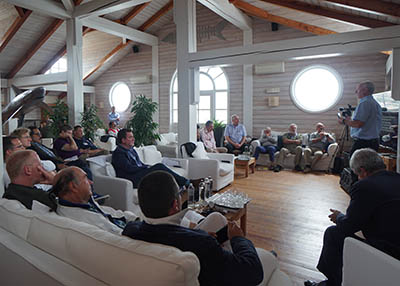 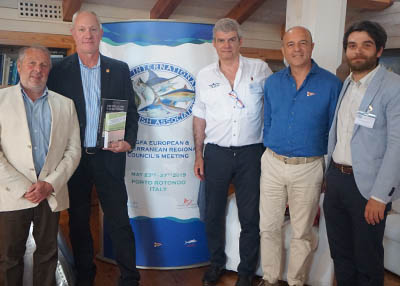 IGFA President Nehl Horton, Conservation Director Jason Schratwieser and Marketing Manager Andy Saldana were in attendance for the meeting and provided attendees with an update on the progress the IGFA is making against its three-year strategy, which enters its second year this June. The presentation highlighted the IGFA’s recently launched Passports to Fishing Kits and IGFA Online Angling Modules, IGFA’s conservation efforts through the IGFA Great Marlin Race (IGMR) and the establishment of International Game Fishing Angling Day (IGFA Day) on June 7, 2019 as part of the organization’s 80th anniversary celebration.

In addition to the productive meetings, the YCPR hosted an IGFA Passports to Fishing clinic on May 27, 2019 where the young participants learned about the basics of angling and the importance of environmental stewardship under the guidance of IGFA staff and meeting attendees. This was the first of many IGFA Passports to Fishing Clinics to be hold at the YCPR during the upcoming summer season.

The IGFA would like to extend sincere gratitude to the meeting sponsors who made this event so successful, including IGFA Trustee Massimo Brogna, IGFA Captain Sandro Onofaro and the President of the YCPR Roberto Azzi.

The IGFA announced in early May the appointment of the new South America Regional Council, following the preliminary meeting that took place in Buenos Aires, Argentina in late April 2019.  IGFA Trustees, Representatives, Members, Captains and Clubs residing in South America participated in a two-week nomination process to recommend council officers and committee members. The nomination process concluded on Monday, May 6, 2019, with a total of 48 nominations received over the two-week period.

Following the establishment of the IGFA European and Mediterranean Regional Council last January, this is the second new regional council formed as part of IGFA’s strategy to increase the association’s relevance and impact around the globe.  The new IGFA Regional Councils provide local organizational structures to help drive the IGFA mission and strategy at the grassroots level and cultivate relationships with IGFA representatives, clubs, captains, weigh stations and members in the regions.

The following individuals have been selected as officers of the new South America Regional Council. 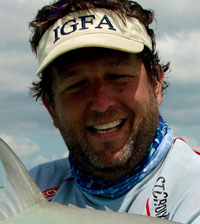 Juan Pablo Gozio's father introduced him to fishing at the age of three. After a career in the oil and gas industry, Gozio created Tech Tackle, which designs and manufactures fishing products. As an IGFA Representative since 2013, Gozio has worked tirelessly to promote the IGFA and its mission in Argentina and beyond. Gozio is an accomplished fly angler with several IGFA World Records and tournament wins to his credit. 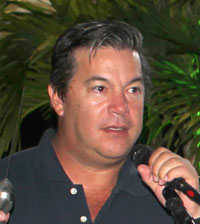 Pedro Rodriguez chairs the fishing committee at the Fishing Club of Cartagena in Colombia, where he has been active in promoting youth angling through tournaments, and ethical angling practices through sustainability seminars where he emphasizes the importance of catch-and-release to local anglers.  Rodriguez, an IGFA Representative since 2012, is also active in billfish satellite tagging programs and recently helped pass a resolution prohibiting the issuance of additional licenses to commercial fishing operations in Colombia's Atlantic and Pacific waters. 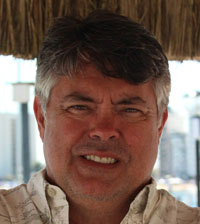 Perez was introduced to sport fishing at age five by his grandfather. After moving to Ecuador, he had the opportunity to fish alongside many Ecuadorian angling legends like Manuel Ignacio Gomez- Lince, Jorge “Pancho” Jurado, Emilio Bruzone, and Andres Schmidt. Perez has been involved in the Salinas Yacht Club´s Board of Directors and the fishing tournament’s organizing committee for over 10 years and has served as an IGFA Representative since 2012. He is a staunch promoter of catch and release, educates anglers on the IGFA International Angling Rules prior to tournaments, hosts youth angling clinics and often assists anglers with the submission of IGFA World Record applications. 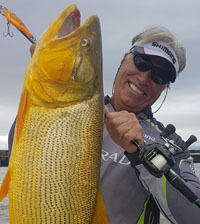 Ian-Arthur De Sulocki has been a sport fisherman since 1989. As an experienced guide, IGFA World Record holder, tournament angler and writer, Sulocki has a strong understanding of the IGFA International Angling Rules and IGFA Angler Recognition program. Sulocki writes for several angling publications in which he promotes the IGFA, as well as the importance of catch-and-release and the use of ethical angling practices. Sulocki is a strong advocate of conservation through education and has been involved in youth and guide education programs to ensure sustainable fishing practices in Brazil for years. He has served as an IGFA Representative since 2004. 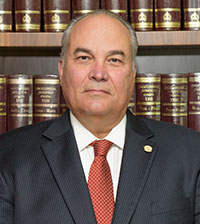 Prior to becoming an IGFA Representative for his native Ecuador in 2001, Luis Gomez Bejarano served as both Vice-Minister of Fisheries and Commodore of the prestigious Salinas Yacht Club. Bejarano is an avid angler and conservationist, working diligently with domestic and international authorities to promote the socio-economic benefits of recreational angling in Ecuador.