It’s been a busy couple of months for the IGFA Great Marlin Race.  Here’s an update on what transpired in July and August.

For the fifth year in a row, the IGMR returned to the Bermuda Triple Crown Tournament, where four satellite tags were deployed on blue marlin.   The first tag deployed was sponsored by Frank Rodriguez aboard his 92-foot Viking, Fa-La-Me.  The tag was deployed on the healthy 200-pound blue by IGFA Conservation Director Jason Schratwieser.  Also present was Andrew Cox from Costa Sunglasses, the presenting sponsor of the IGMR, and videographer Cole Alcock, who joined the expedition to shoot a promotional video for the IGMR.  The video is forthcoming from our partners at Costa Sunglasses, so stay tuned.

The results of last year’s Bermuda Triple Crown IGMR were nothing less than fantastic with long tracks recorded on all five fish that were tagged.  We can’t wait to see where this year’s marlin travel, but will have to wait until tags report in late February and early March 2020.

The Hawaiian International Billfish Tournament (HIBT) is not only the birthplace of the IGMR, it’s also the birthplace of marlin satellite tagging.  With the help of IGFA Trustee Bob Kurz, IGFA Representative Rick Gaffney and Dr. Barbara Block, ten tags were distributed for deployment by anglers.  Dr. Barbara Block was the first person to ever deploy a satellite tag on a marlin, so it was only fitting that she was onboard the boat that caught the first blue marlin of the race. IGFA Representative Marty Firestein caught the blue marlin fishing on the Second Offense and Block had the honor of deploying the first tag of the race, which was sponsored by the Laguna Niguel Billfish Club.

The next marlin of the HIBT race was caught by Steve Philps fishing aboard the Mojo. The estimated 175-pound blue marlin was equipped with a tag sponsored by IGFA Representative Bob Odea and his wife Patti from Papua New Guinea.  A tag jointly sponsored by the Newport Game Fish Club and the Kona Game Fishing Club was deployed on the on the third blue marlin of the race, which was caught by Mark Zmijewski on the Marlin Magic II.  The last tag deployed, to date, was also sponsored by the Kona Game Fishing Club and was placed on an estimated 110-pound blue marlin caught by Dan Diez onboard the Northern Lights. 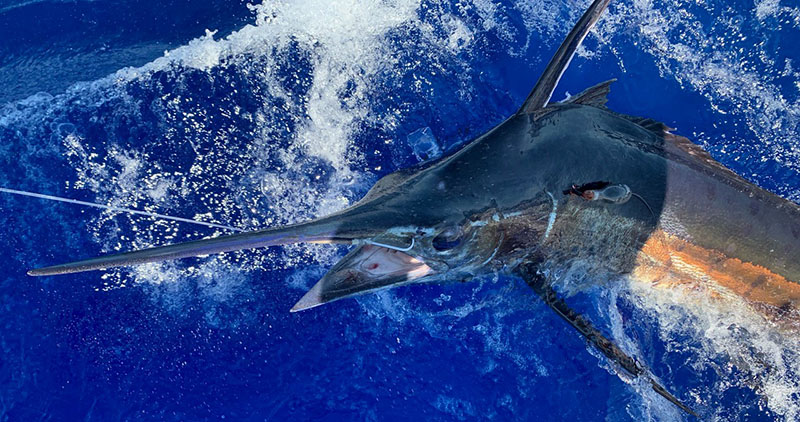 The remaining tags of the race are still out on boats awaiting deployment on healthy blue marlin.  The HIBT is the IGMR’s longest continually running dataset and we’ve seen some amazing things from tagged blue marlin over the years.  Most notably, HIBT deployments allowed Dr. Block’s lab to investigate how La Niña oceanographic conditions may preclude blue marlin from undertaking trans-equatorial migrations.  Research like this underscores the importance of multiyear deployments from the same location to enable scientists to investigate how dynamic oceanographic processes affect blue marlin behavior.