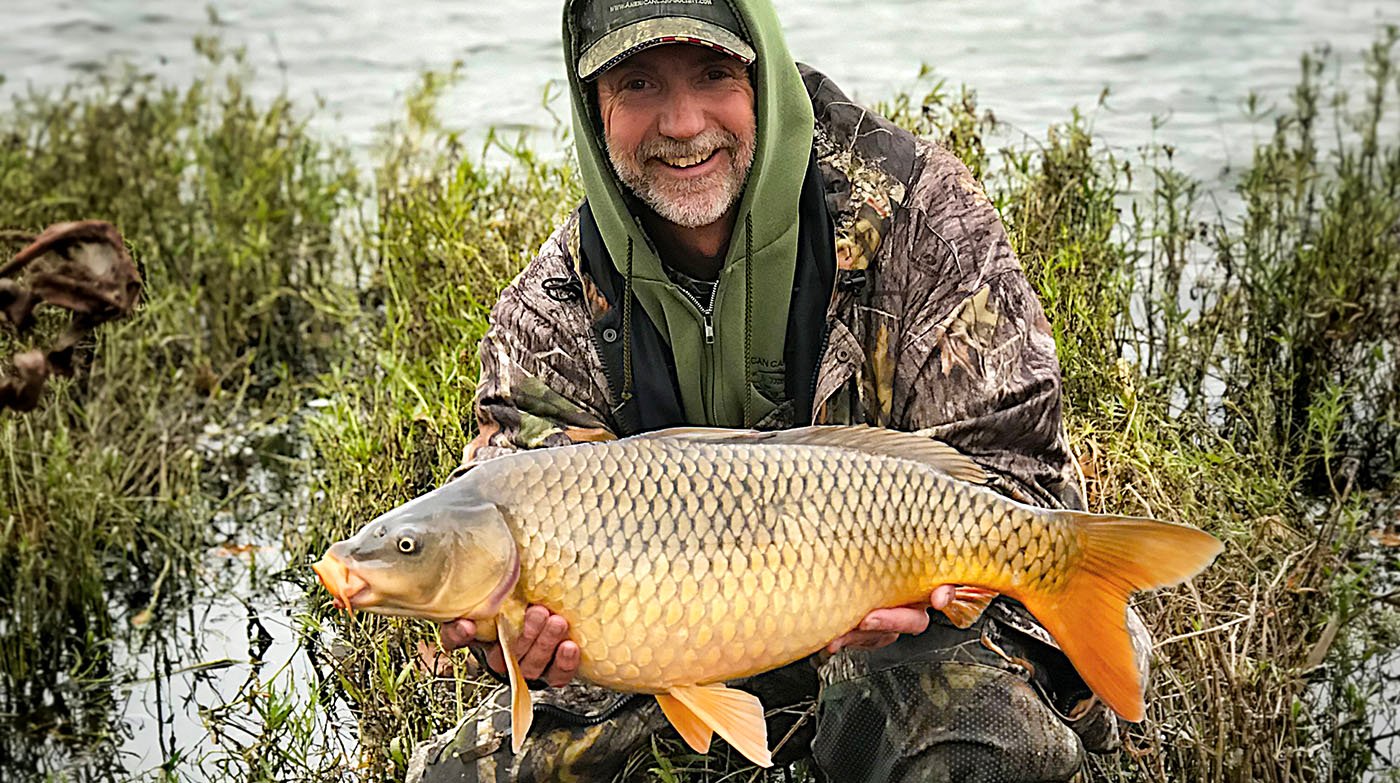 Carp is the common name for various species of freshwater fishes of the family Cyprinidae, a very large group fishes native to eastern Europe and Asia that have since been introduced to various locations around the world.

Izaak Walton, IGFA Fishing Hall of Famer and the father of modern sport fishing, said this about carp in The Compleat Angler, "The carp is the queen of rivers; a stately, good, and a very subtle fish; that was not at first bred, nor hath been long in England, but is now naturalized."

Carp have long been one of Europe’s premier freshwater game fish and are quickly becoming targets of many serious anglers throughout North America. The fall season in North America is a prime time for carp fishing. As water temperatures begin cool, carp begin feeding in earnest for the long winter ahead and it can be easier to catch some of the bigger, warier fish this time of year because they’re often more “reckless” in their eating patterns and food choices.

In this article, we will cover the basics of what you need to know if you want to giving carp fishing a try. 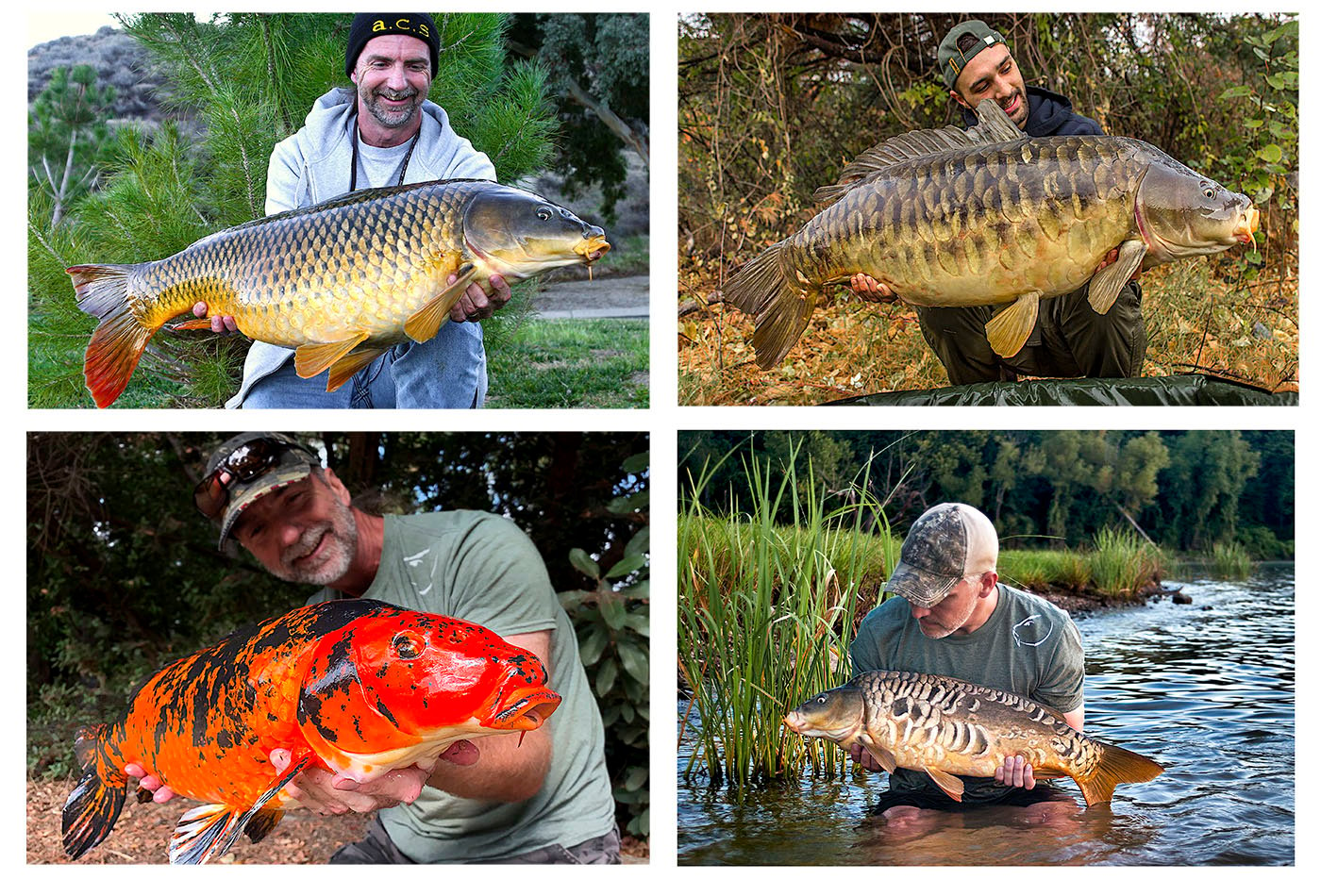 Common carp can vary greatly in color and scale patterns giving birth to a variety of common names such as mirror carp and the decorative, colorful koi carp.

To understand carp fishing, it is necessary to categorically differentiate the common carp, Cyprinus carpio, from other carp species such as bighead, silver and grass, or white amur. Bighead and silver carp are filter feeders and prolific breeders that have wreaked havoc across the midwestern United States by eating many of the native species’ eggs and larvae. The white amur feeds on aquatic vegetation. These three species of fish are often confused with and thrown into the collective “carp” terminology by anglers and even some fisheries management agencies.

Common carp can vary greatly in color and scale patterns giving birth to a variety of common names such as mirror carp and the decorative, colorful koi carp. These three main varieties of common carp are targeted by avid sport fishing anglers across much of the world.

Carp can readily be caught in freshwater lakes, ponds and rivers throughout North America, and often give their location away by breaching the surface just as the sun is rising and in late evening just before sunset. Use this observation to identify carp spots in the area where you live. 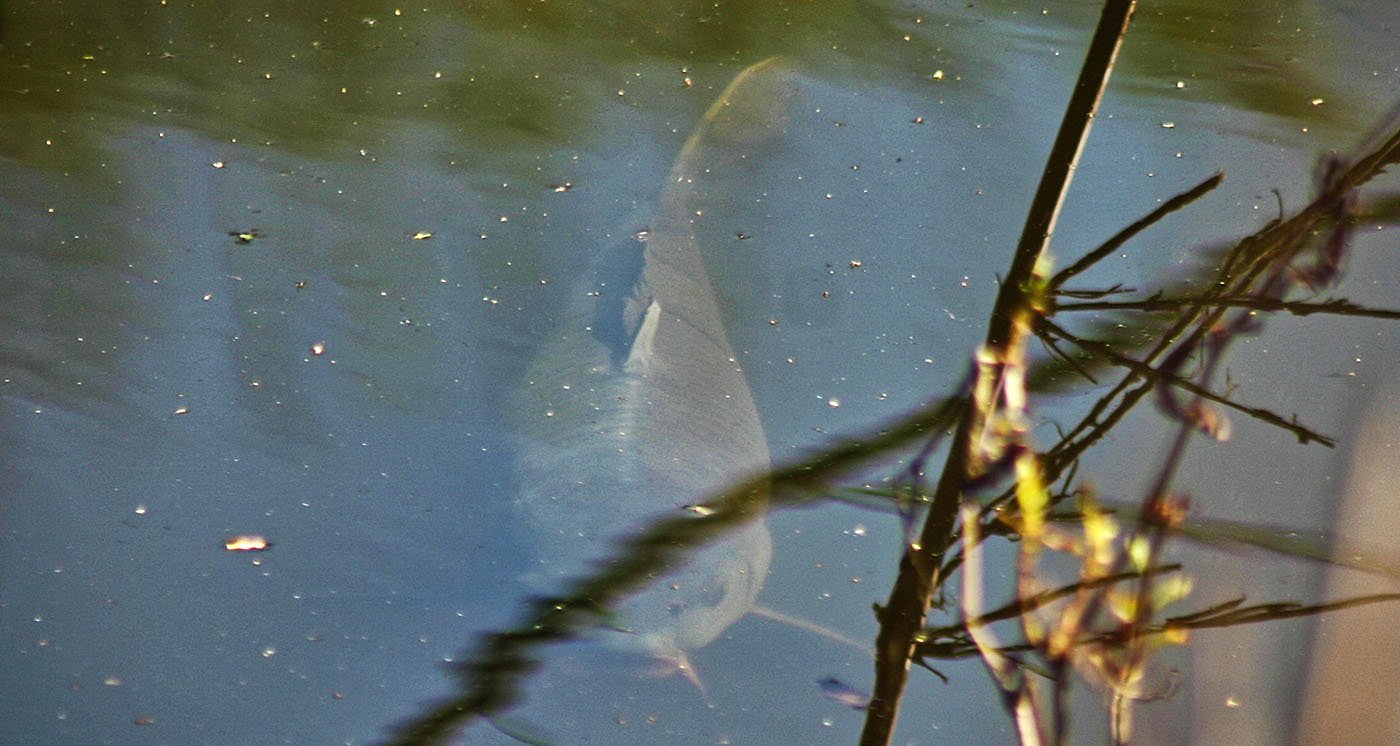 Carp usually patrol the shoreline perimeter when foraging for food. Look for them near reed beds, lilies and other structure, especially early in the morning and late in the day.

Lake and pond tributaries are also excellent areas to find carp as flowing water brings with it an ongoing supply prey species. Carp are naturally shy fish, so other good areas to find them are where shallow water drops off to a deeper depths, allowing fish feel safe and secure.

Common carp feed primarily on snails, crustaceans, insects, larvae and plant material. Larger carp seem to become selective and prey on crayfish and freshwater clams and mussels, including both the zebra and quagga mussels. Clear patches in weed beds and gravel can signify a regular carp feeding zone. Carp are also opportunistic feeders and won’t be far from where ducks or geese are regularly fed by people.

An Intro to Catching Carp

Although carp will feed on the surface and mid-water, they’re more likely to be found looking for food near the bottom during the day. Here is an overview of the most common methods to target carp.

Free-lining:  Carp up to 10 pounds are relatively easy to catch and are generally found very close to the shore, which makes them accessible to many land-based anglers. The simplest way to catch carp is to visit a local pond with a loaf of bread, and a number six or eight octopus-style hook. A reel with good line capacity spooled with light line on a medium-heavy rod is a good choice. Three or four kernels of canned sweet corn threaded directly onto the hook and with or without a quarter or half ounce sliding egg sinker will certainly produce a carp in a location they are feeding. Feeding or “chumming” an area prior to fishing, where local regulations allow, always helps bring carp into the area you intend to fish.

Float Fishing: Bread and commercially available paste types of carp bait can be molded around a hook and “free-lined” into an area where the angler can watch the line. However, a more visual approach to catching carp is to use floats or bobbers as strike indicators.

Mold bread around the hook with just the point showing and learn how to set the depth of the bait beneath the float so that it sits on the bottom of the lake or pond. Make sure that the reel’s drag is set light or simply open the bail.

Once you have found a spot, cast your line, and if legal by local regulations, start chumming to turn the fish on or bring them into the strike zone. A handful of sweet corn or a few pieces of bread rolled into balls that will sink works well. Give it a few minutes for the fish to find the bait. Pay very close attention to the float as a strike can be so fierce that it will literally pull the rod from your hands. As soon as the float disappears, set the hook. 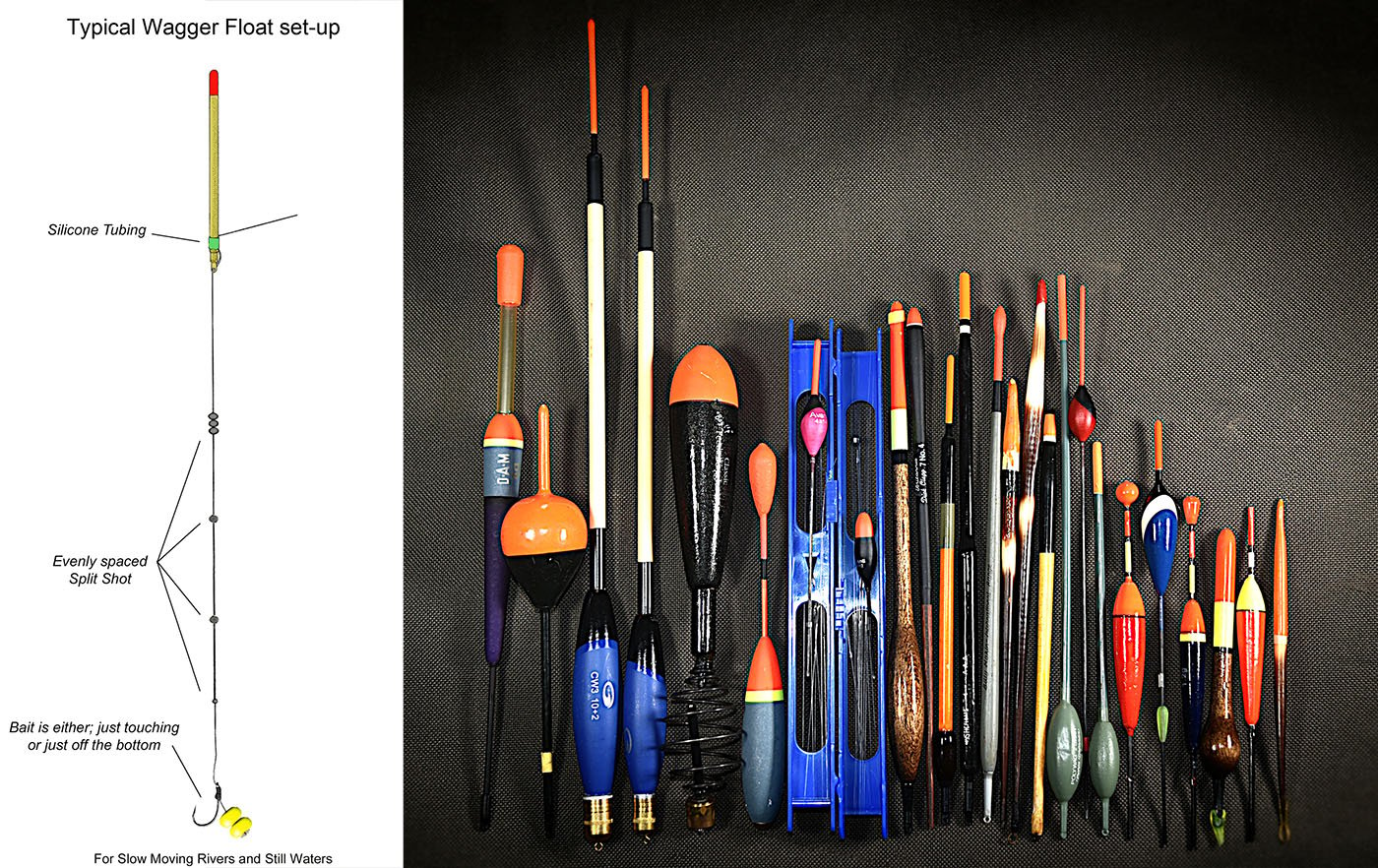 Although most fishing tackle can be used to catch carp, a longer rod is better suited to float fishing from the shore because it allows anglers to cast farther.

Rods from 8-12 feet in length will work well for casting a number 8 single hook tied to 8-to-12 pound line. Traditionally, a spinning reel is used for float fishing, although baitcaster style reels can be used as well. If you are float fishing, a more sensitive European-style waggler float is recommended over a traditional bobber. In simple terms, wagglers are floats where the line is only attached to the bottom of the float. This type of float arrangement also provides good stability and allows the angler to deploy the bait at the necessary depth by adding split shot above the hook.

Sweet corn and bread are two of the best baits to use for carp, but earthworms are also excellent, as well as dough baits made from mixing breakfast cereals with syrup. For bigger fish and longer, multi-day fishing sessions, hard boiled baits or “boilies," as they are known, are excellent to use on a hair rig.  Boilies are boiled paste baits typically comprised of fishmeal, milk protein, bird food, semolina and soya flour. Mixing boilies with egg as a binding agent and boiling them creates firm round balls that will last longer in the water.

The hair rig, which was approved as IGFA-compliant in 2007, specifically targets and takes advantage of the way carp feed. When the hair rig is tied correctly as described below, the hook turns when the fish eats the bait and safely hooks most fish in the bottom lip.

The hair rig is the foundation of most carp rigs these days and uses various hook length materials, including rig rings and shrink/silicone tubing to make them even more effective in different fishing conditions. Even in its simplest "naked" form shown below, the hair rig is a game changer for the angler who learns how to tie it effectively.

The common carp is considered one of the hardest fighting freshwater game fish in the world and is now being pursued by anglers of all persuasions from fly fishermen to dedicated bait-specialized carp anglers.

Have fun catching this powerful game fish and be sure to handle and release them in a responsible, ethical manner. I hope this article gives you the knowledge and inspiration needed to get out and pursue these often-overlooked game fish!

The American Carp Society (ACS) was founded in June 2002 by Wayne Boon and Sean Manning with the goal of promoting and educating the public on the sport carp fishing in the USA.

Like the IGFA, The American Carp Society is a membership-based organization and is responsible for promoting the sport and ensuring careful stewardship of carp with proper handling and treatment during capture. www.americancarpsociety.com, [email protected], www.instagram.com/american carp_society