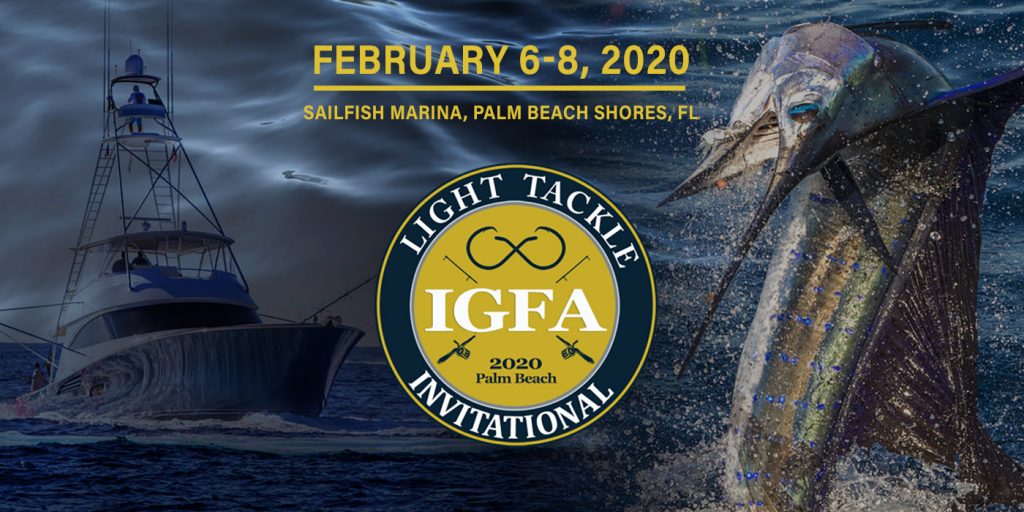 This February, the IGFA will host the inaugural IGFA Light Tackle Invitational in Palm Beach Shores, Florida. With a maximum line class of 12-pound (6-kilogram) and strict adherence to IGFA Angling Rules, the IGFA Light Tackle Invitational is a genuine angler's tournament and a platform for light tackle anglers from around the world to showcase their skills and sportsmanship.

The launch of the IGFA Light Tackle Invitational marks a significant step in the IGFA’s three-year strategy of reengaging the organization in competitive angling events to increase the relevancy of the IGFA with recreational anglers around the world.

The IGFA Light Tackle Invitational will be based out of Sailfish Marina Resort in Palm Beach, Florida. It will recognize the top angler and top boat, based on the total number of points accumulated through billfish releases. Catch and release species include blue marlin, white marlin, spearfish, and sailfish. There will be additional weight-based categories awarded to the anglers who register the heaviest dolphinfish, tuna (blackfin and yellowfin), and wahoo.

"With this light-tackle tournament, we are focusing on the sport and several important facets of our mission: the promotion of responsible, ethical angling practices, and recognizing outstanding angling accomplishments."

With the strategic establishment of boutique, invitational-style tournaments – such as the IGFA Light Tackle Invitational - in locations around the world over the coming years as well as reengaging with prominent, established tournaments that align with IGFA’s standards, the organization will once again be plugged into the competitive angling scene where it will connect with passionate anglers around the world.

A Look Back: The History of IGFA Tournaments

The IGFA’s International Angling Rules have largely served as the universal set of rules for competitive angling events for 80 years. However, the IGFA became directly involved in hosting angling tournaments in 2000 with the establishment of the IGFA Offshore World Championship, which was spearheaded by IGFA Fishing Hall of Famer and former IGFA President Mike Leech.

Over the next eight years, the IGFA grew the Offshore World Championship into a truly world-class event that drew participation from anglers around the globe through a qualifying event format.

Are You Up to the Challenge? See You There!

So, after an 11-year hiatus from hosting tournaments, the IGFA is excited to once again enter the competitive angling space with the IGFA Light Tackle Invitational. Anglers from around the world are encouraged to participate in the fun, comradery and sportsmanship during this premier angling event. The event starts on February 6, 2020, with the Captain’s Meeting and Kick Off Party.  Fishing will commence on Friday, February 7, 2020, with the second and final day of fishing on Saturday, February 8, 2020.