The 2019 IGMR Bermuda Triple Crown Billfish Championship kicked off at the end of June with four tags generously sponsored for deployment on blue marlin.

The following day, on July 4, 2019, the third tag of the event, sponsored by Dan Murphy, was deployed on a 250 lb (113 kg) blue marlin by Chase Pake after being caught by Scott Poole alongside Waste Knot with Captain Michael Tickle.  The fourth and final tag of the event was sponsored by Dan Devine and deployed on July 18, 2019 on a 200 lb (91 kg) blue marlin by Charlie Coats alongside Reel Steel with Captain Jason Parker after a 45-minute fight with Mike Verzaleno.

The tag on Fish 2 (tag #35429) was the first to surface on March 3, 2020 after reaching the full-programmed deployment time of 244 days, 2,161 nautical miles from the tagging location, taking first place in the event. Following deployment, this fish swam northeast spending time on the continental shelf off the northeast United States.  Fish 2 then swam east before turning south towards the equator.  The tag popped off 10 degrees north of the equator off South America for a total estimated track length of 6.160 nm*. Over the course of the deployment, Fish 2 spent approximately 55% of the time within 10 m (33 ft) of the surface where the water temperature ranged from 24 – 29°C (75 – 84°F).  Time in deeper water was primarily between 25 – 100 m (82 – 328 ft) where the water temperature ranged between 20 – 28°C (68 – 82°F).  The deepest dive occurred at the end of December to a depth of 156 m (512 ft) where the water temperature was 18°C (64°F), the coldest water experience during the deployment. 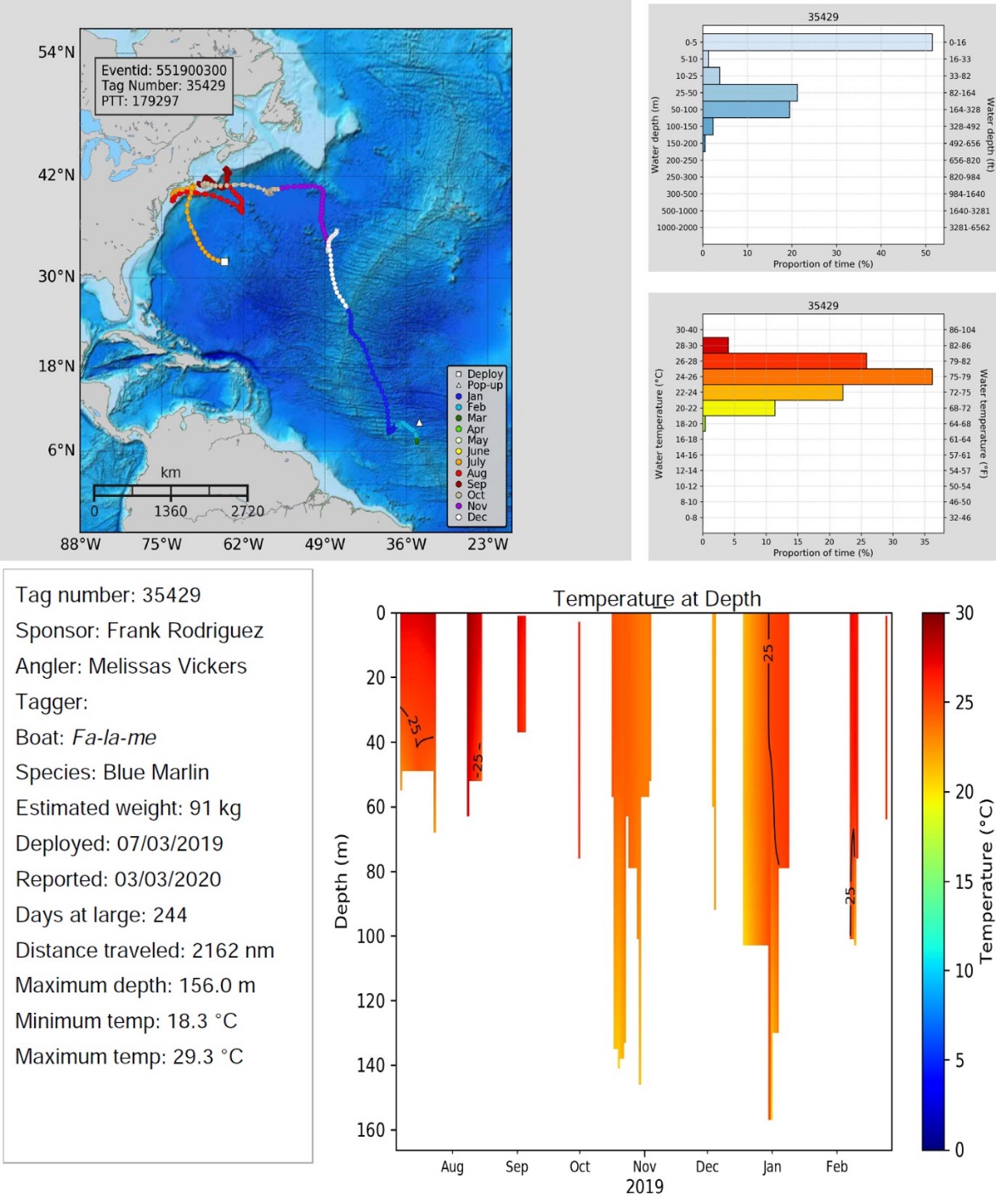 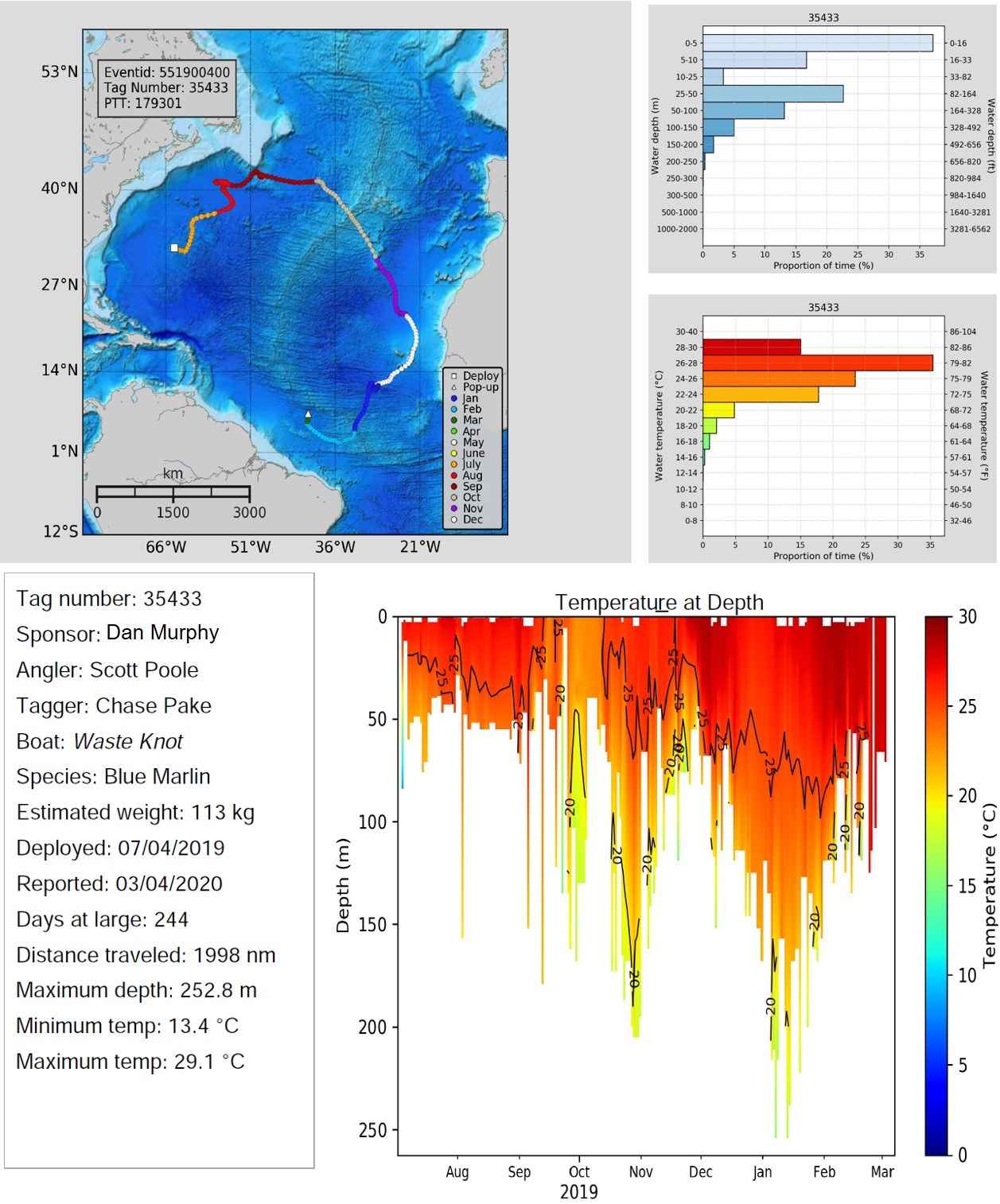 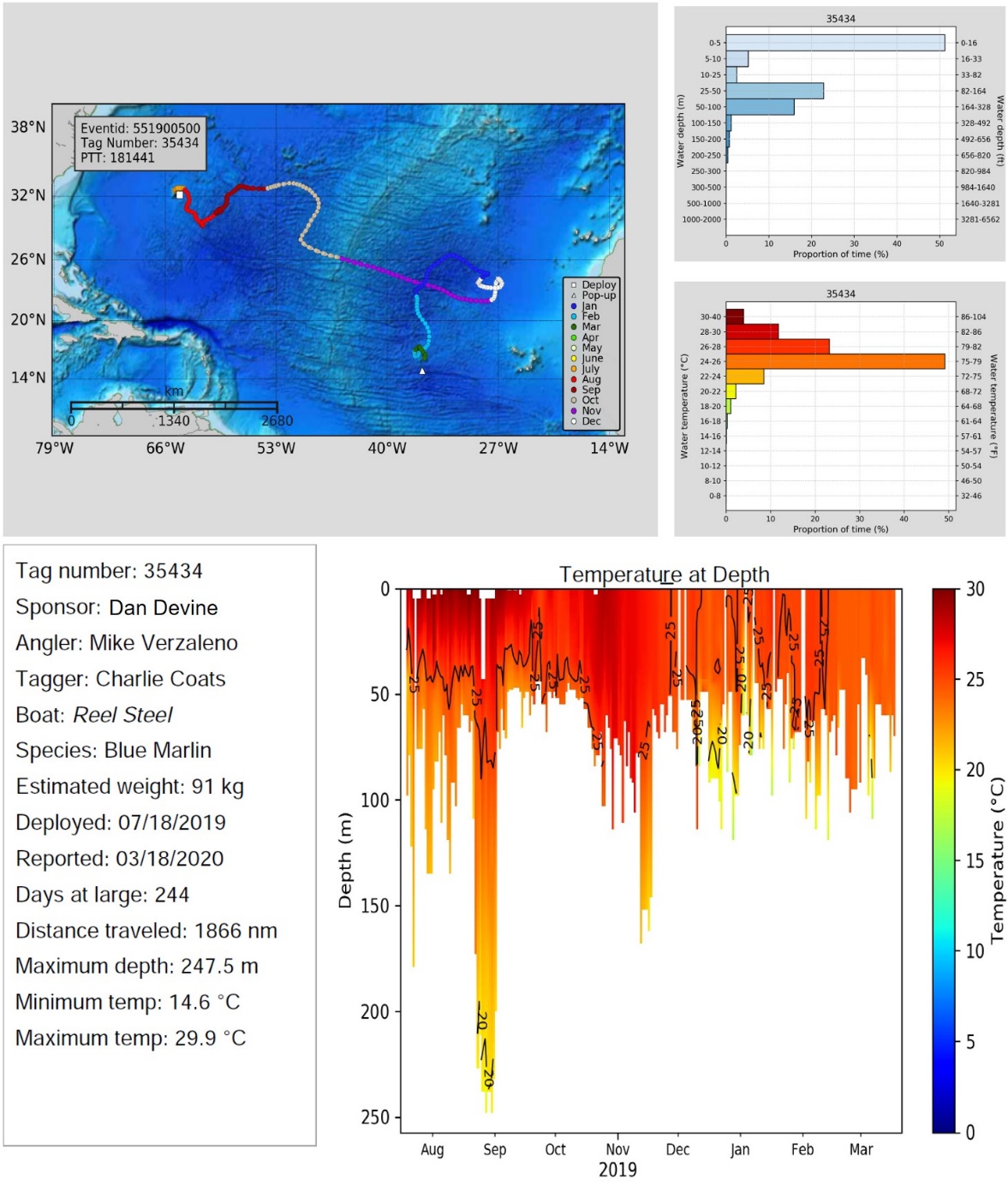 The tag on Fish 1 (tag #35428) did not report. Although this is an unfortunate result, it highlights the inherent challenges of tagging large, wide-ranging fish in the ocean.

Three of the four tags deployed in the 2019 IGMR Bermuda Triple Crown reported, and all three reached the full-programmed deployment time of eight months. These long-term deployments are especially valuable in understanding the habitat use of blue marlin in the Atlantic across seasons.  As tag technology continues to improve, we look forward to extending these deployments to a full year.

The 2019 IGMR Bermuda Triple Crown marks the fifth consecutive year for this event. After five years, this event had deployed 32 tags of which 27 (84%) have reported.  The accumulated dataset consists of 3,512 tracking days with a total point-to-point distance of 34,451 nm and a total estimated track distance of 78,947 nm*.  This would not be possible without the enthusiastic participation of the sponsors, anglers, captains and crews, which have made this IGMR dataset the largest in the Atlantic Ocean. The five years of tracks show widespread use of the Atlantic Ocean. Following deployment, fish have been seen to travel both north and south. Fish that initially travel north typically move east and south over time. Several of the ‘northerly’ fish have moved as far east as Cape Verde, and many of the fish, irrespective of initial direction after deployment, use an area around 10°N between South America and Africa.  These two locations may be important areas for feeding and/or reproduction. Interestingly, only two fish have crossed the equator and there are very limited movements west of Bermuda.  As this dataset continues to grow, we will be better able to understand how blue marlin use the Atlantic Ocean and how their habitat use might overlap with commercial fisheries, providing valuable data for conservation efforts.

We are very excited to add more data from Atlantic blue marlin to the IGMR database and hope to increase this data set in years to come. We are grateful to the tag sponsors, captains, anglers, crew, and all other participants that made the 2019 IGMR Bermuda Triple Crown so successful. These datasets help us to learn about billfish behavior in an effort to increase their conservation and protect the sport we love for future generations of fishing!