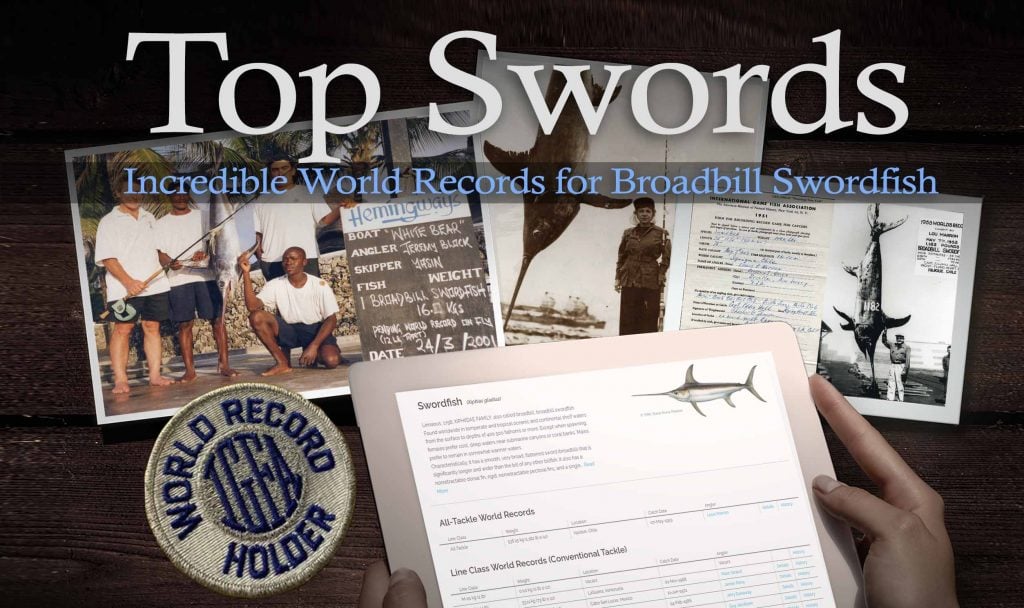 For many of the iconic game fish species such as marlin, bass, tuna, and tarpon, there is little chance of landing a world record class fish simply because the bar has been set so high over the years. However, the broadbill swordfish is different. Take a look at the 2021 World Record Game Fishes book and you will notice that several impressive world records for swordfish have been taken within the past decade, with most fish coming from Australia and New Zealand as anglers have refined the deep-dropping tackle and techniques in these regions. That said, the following selection of IGFA World Record swordfish may get you wondering if their current place in the record books will soon be defeated.

Lou Marron and his wife Genie spent the better part of 30 years traveling the globe searching for record fish. Upon hearing that commercial fisherman had been harpooning huge swordfish off the coast of Chile, they traveled to South America for a shot at a potential record. On May 7, 1953, while fishing aboard the Flying Heart III, Lou landed this incredible 536.15-kilogram (1,182-pound) swordfish. With this fish he set both the IGFA All-Tackle World Record for the species and the Men’s 60-kg (130-lb) Line Class World Record. Marron landed the enormous broadbill after a nearly two-hour battle on 39 thread linen line. In the process of landing the fish, its bill caused damage to the hull of the boat. Lou’s fish beat the previous record by 322-pounds, and to this day it remains the largest swordfish ever caught on rod and reel.

The original mount of Marron’s fish, made by legendary Miami taxidermist Al Pflueger, included actual parts of the fish (bill, head, tail and fins). The mount, which was constructed of plaster, weighed nearly 200 pounds and was a feat to hang from a wall. After creating a new mold, King Sailfish Mounts produced a lightweight 50-pound model from composite materials. The original fish parts were carefully restored and re-attached. The mount was then finished with a special mixture of paints designed to maintain the authenticity of this historic catch. The mount resides at IGFA Headquarters. 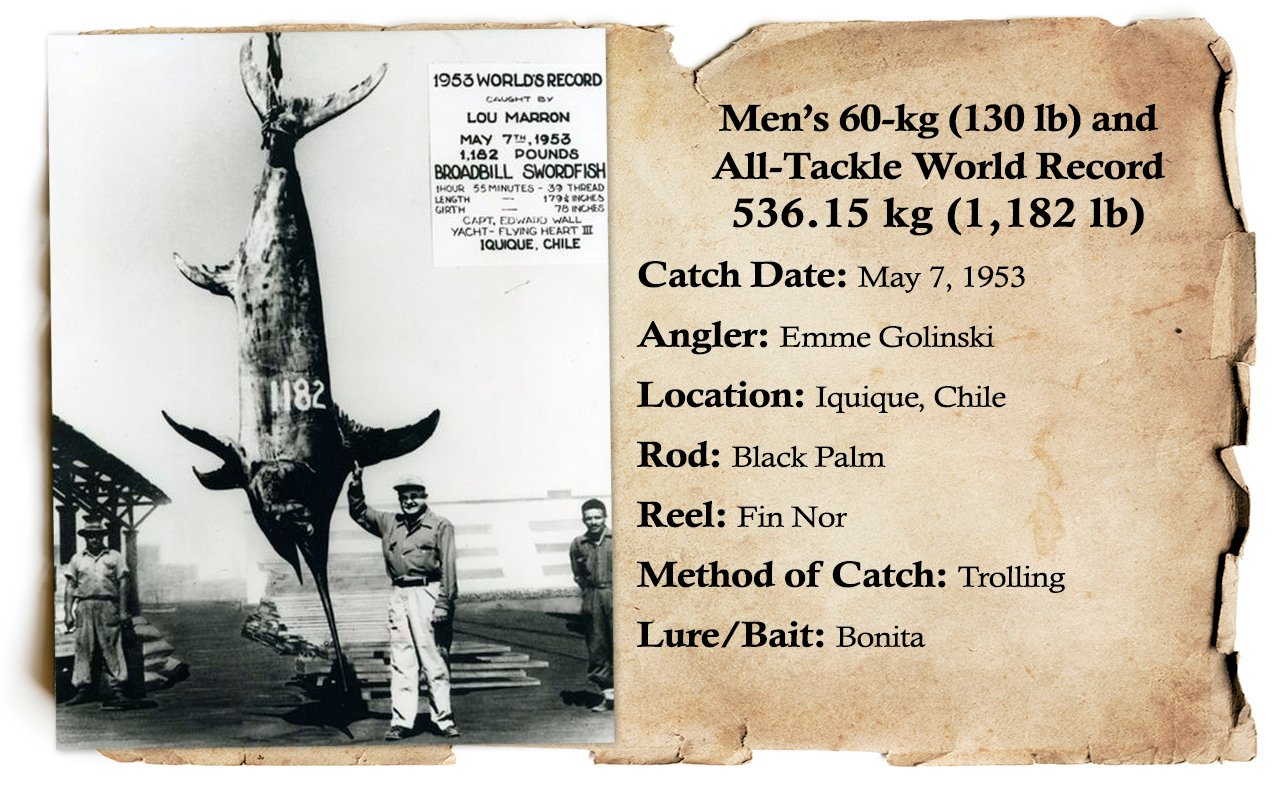 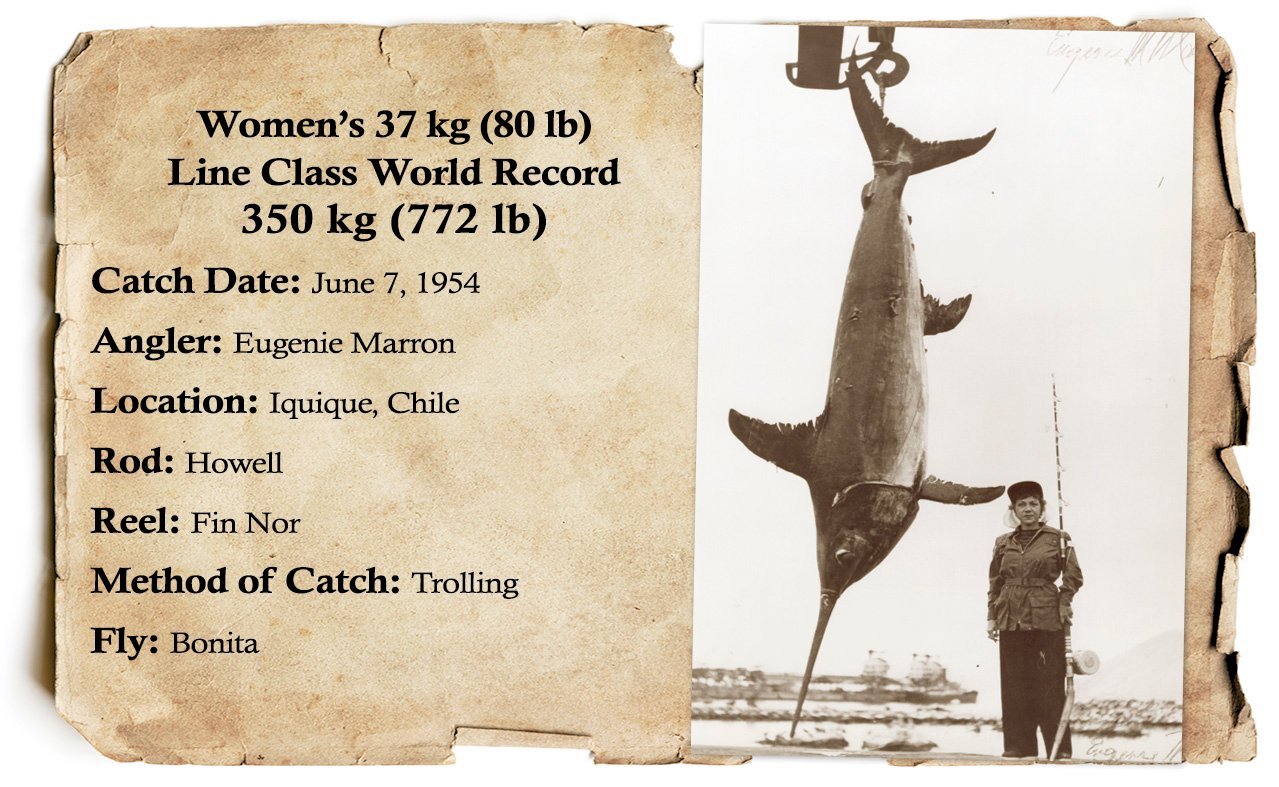 Eugenie “Genie” Marron is arguably one of the most revered offshore female anglers of her generation. She holds the title of landing the first bluefin tuna by a woman off New Jersey in the 1930s. She also wrote a famous book about her fishing experiences called ''Albacora: The Search for the Giant Broadbill'' (Random House 1957). And, she assisted in research at the Massachusetts Institute of Technology and the University of Miami about the central nervous system of the giant squid. On June 7, 1954, Genie landed this massive 350-kilogram (772-pound) swordfish to set the IGFA Women’s 37-kg (80-lb) Line Class World Record. The record swordfish ate a trolled bonita and was landed after a one-hour and 30-minute fight. This record still stands today, nearly 67 years later!

Guy Jacobson was trolling a squid imitation lure off King Bank off New Zealand on March 19, 2009, when he landed the first of his three current IGFA record swordfish. This swordfish weighed in at 134.6-kilograms (296-pounds, 11-ounces) and earned Guy the IGFA Men’s 8-kg (16-lb) Line Class World Record for the species. After a 10-minute fight this swordfish swam at the boat and was quickly and luckily gaffed by mate Brad Fergus. A tail rope was placed on the sword, and it was subsequently lifted into the cockpit of the Hookin’ Bull to secure the catch. Guy brought his record fish to the Houhora Big Game & Sports Fishing club for an official weight and to snap some photos. 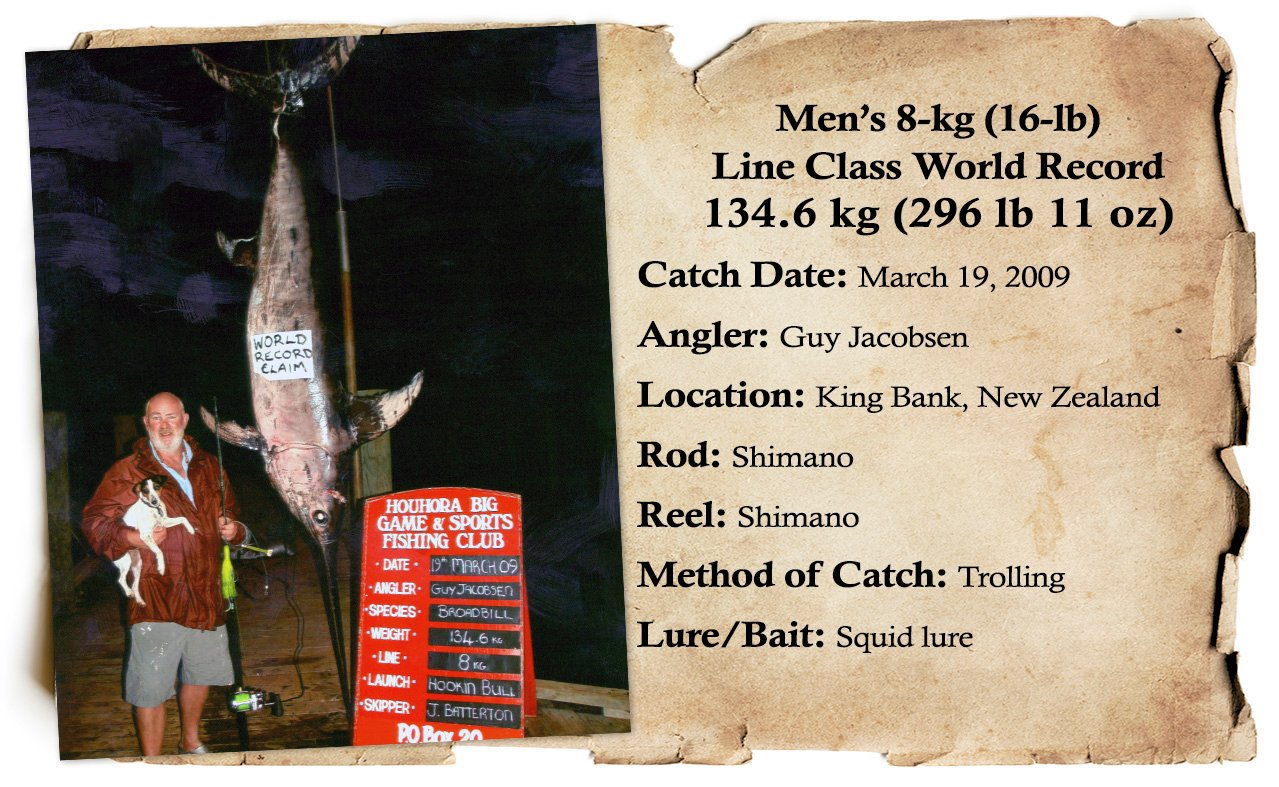 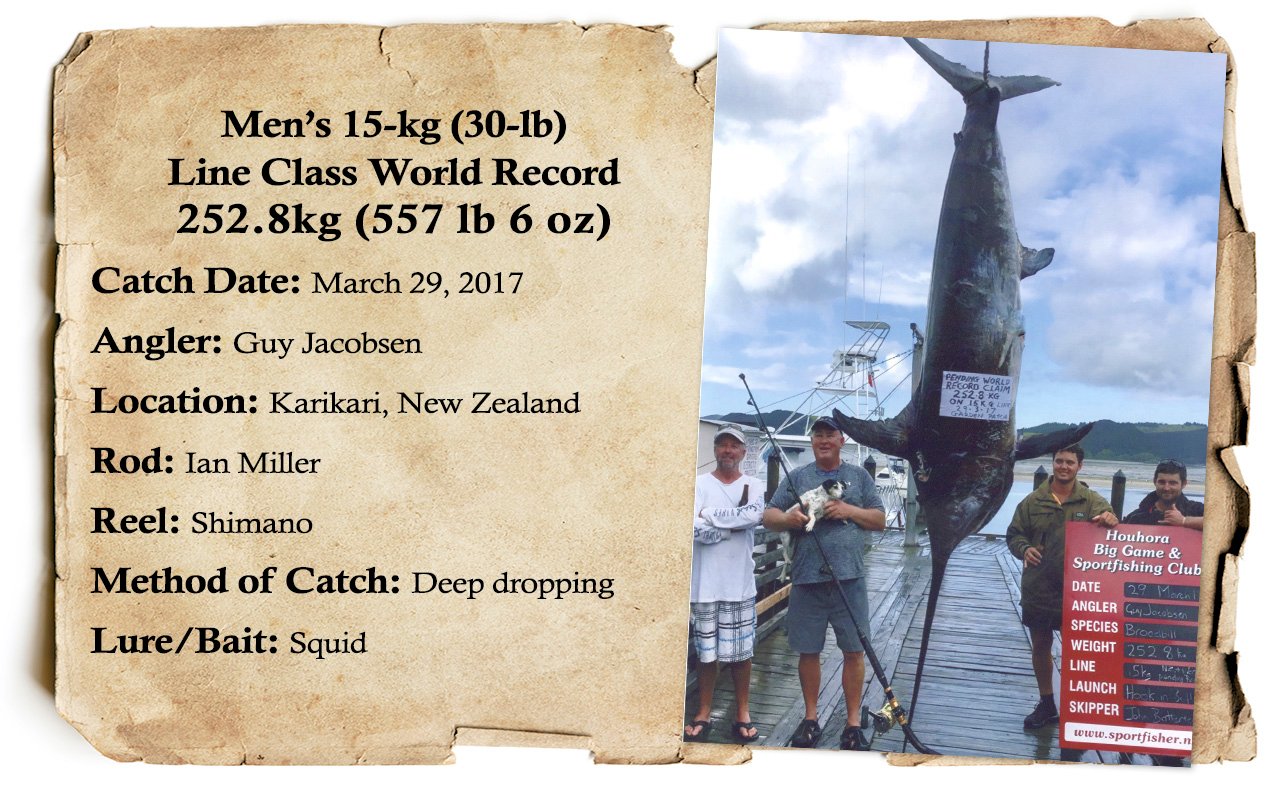 Roughly eight years after his 8-kg (16 lb) Line Class World Record, Guy Jacobson caught an even bigger swordfish on 15-kg (30-lb) class tackle. On March 29, 2017, Guy was off the coast of New Zealand deep-dropping a rigged squid when this 252.8-kilogram (557-pound, 6-ounce) swordfish struck the bait. After a 25-minute battle mate James Lourie was able to gaff the sword, and the fish was subdued with the help of a tail rope. After the fish was landed, Guy brought the sword to the Houhora Big Game & Sportfishing Club for an official weight.

Two record fish in two days! The next day after catching the amazing 252.8-kilogram swordfish to set the IGFA Men’s 15-kg (30-lb) Line Class World Record, Guy accomplish what could possibly be one of the most incredible feats in IGFA World Record history - earning two IGFA Line Class World Records for swordfish in consecutive days. Once again Guy and crew were deep dropping rigged squid off the coast of New Zealand when he hooked into an even bigger fish than the day prior. He landed this 269-kilogram (593-pound, 1-ounce) swordfish after only a 30-minute battle on 10-kg (20-lb) line.  Guy was fishing aboard his custom G&S sport fisher Hookin’ Bull captained by John Batterton. Once again, the fish was brought to Houhora Big Game & Sports Fishing club for an official weight to secure his third of four swordfish world records in the books. 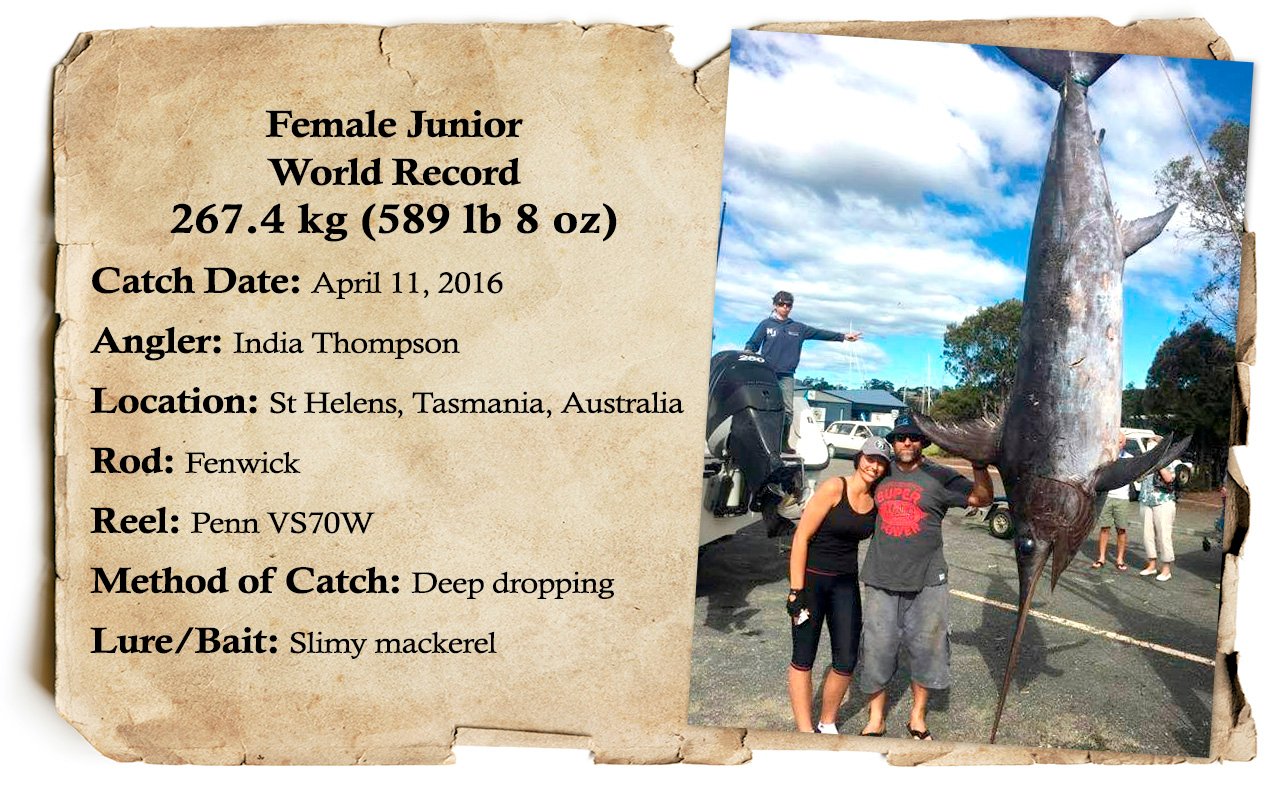 Ever since she was a little girl and began fishing with her father, India Thompson had wanted to catch a giant swordfish. On April 11, 2016, that became a reality when the then 16-year old landed this impressive 267.4-kilogram (589-pound, 8-ounce) broadbill to set the IGFA Female Junior World Record. On that fateful day India and her father were fishing off St. Helens, Tasmania, in their 305 Boston Whaler Conquest. They were deep dropping a slimy mackerel on 37-kg (80-lb) line. When they first landed the fish, they thought it was smaller than what it weighed and were surprised when it tipped the scales at almost 600 pounds.

Marg Love was fishing aboard the aptly named Broadbill on May 1, 1993, when she caught this 120.35-kilogram (265-pound, 5-ounce) swordfish, earning her the IGFA Women’s 6-kg (12-lb) Line Class World Record for the species. Marge was fishing with legendary Captains Skip Smith and Arnold Michaels with mate Scott Levin off Gordon’s Bay, South Africa.  The fish ate a rigged squid and then suddenly charged the boat. After a short 10-minute battle, mate Scott Levin was able to gaff the fish, and with the help of the entire crew, they boated the still lively fish. A member of the Gordan’s Bay Angling Club, Marg brought the fish there for an official weight on a certified scale to document the world record. 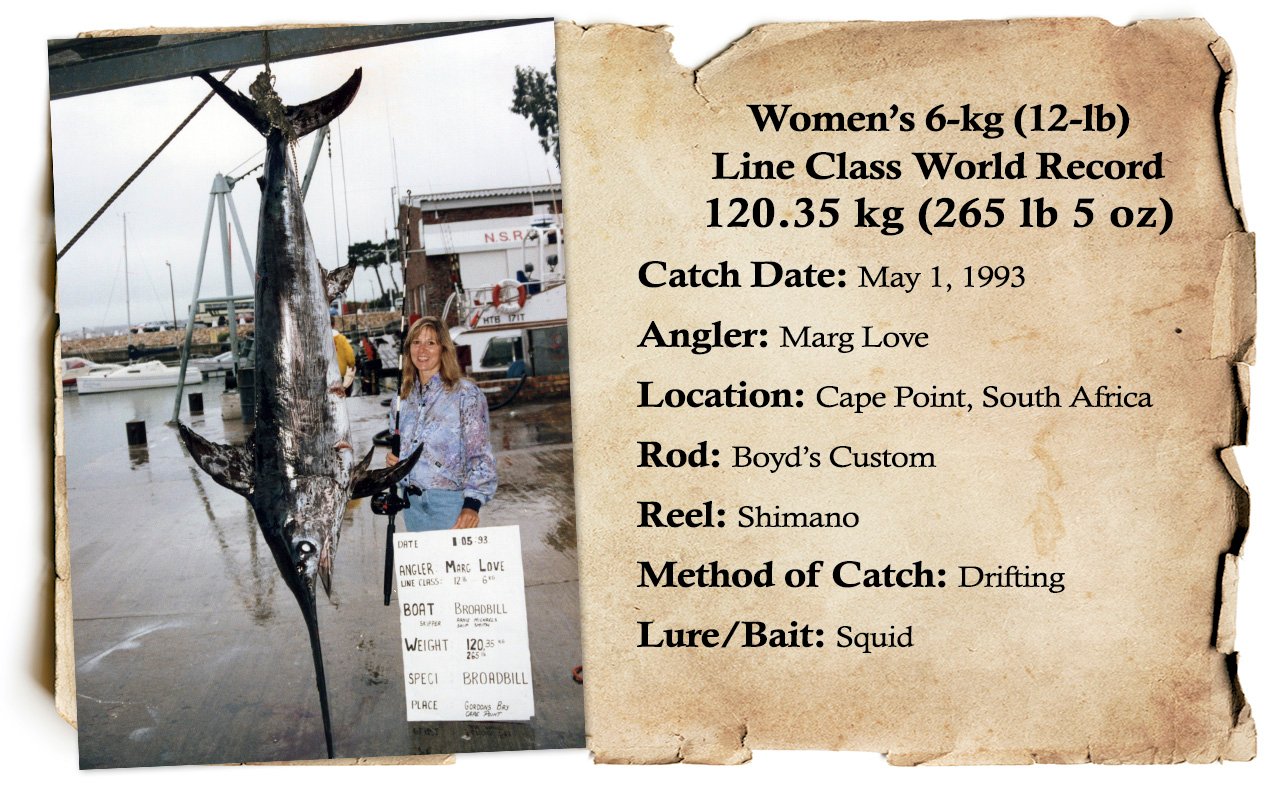 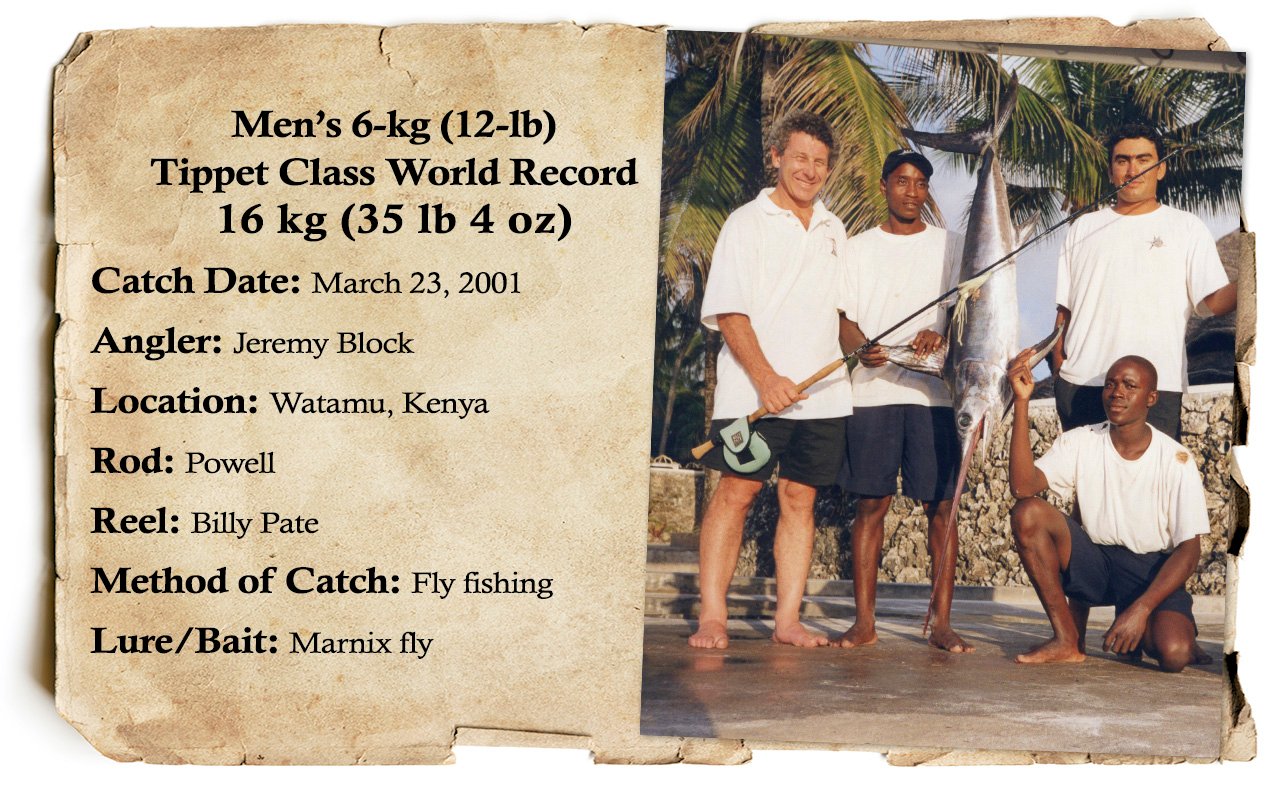 Fishing for swordfish on conventional tackle is challenging enough but hooking and landing a sword on fly tackle is downright crazy! Kenyan angler Jeremy Block accomplished this incredible feat on the night of March 23, 2001, when he landed this 16-kilogram (35-pound 4-ounce) swordfish on the fly. He was fishing 24 miles off the coast of Watamu, Kenya, where the fish was teased up behind the boat in the dark. Jeremy laid his fly in front of the swordfish, it ate the fly, and the battle began. After a relatively short battle the fish was brought boat side and landed. Jeremy was fishing out of Hemingway’s Resort in Watamu, where he had the fish weighed on a certified scale. The catch earned him the IGFA Men’s 6-kg (12-lb) Tippet Class World Record.

Daniel Wilson, age 15 at the time of the catch, landed this giant swordfish on May 21, 2021, to set the IGFA Men’s Junior Record for the species. Daniel was fishing with his father Nathan aboard the Pearl Miner off Mayor Island, New Zealand, when he hooked the fish while deep dropping baits during the daytime in good weather conditions. An hour before catching the beast, Daniel caught a smaller swordfish estimated at roughly 75-kilograms (160-pounds) that they tagged-and-released.

The next time he hooked up, things were a little different. He was attached to his record swordfish for four-and-a-half hours before the team had the second fish subdued alongside the boat.

Nathan says that during the first two hours of the battle the fish stayed relatively close to the surface before diving and staying deep for the remainder of the fight.  The massive sword weighed 282.80-kilograms (623-pound, 7-ounce) and is the largest swordfish ever recorded by a junior angler (16 years or younger). Daniel’s father, when describing the fight, mentioned that his son said the final 30 minutes of the battle were purely excruciating, and stated, “It’s safe to say he slept well that night.” 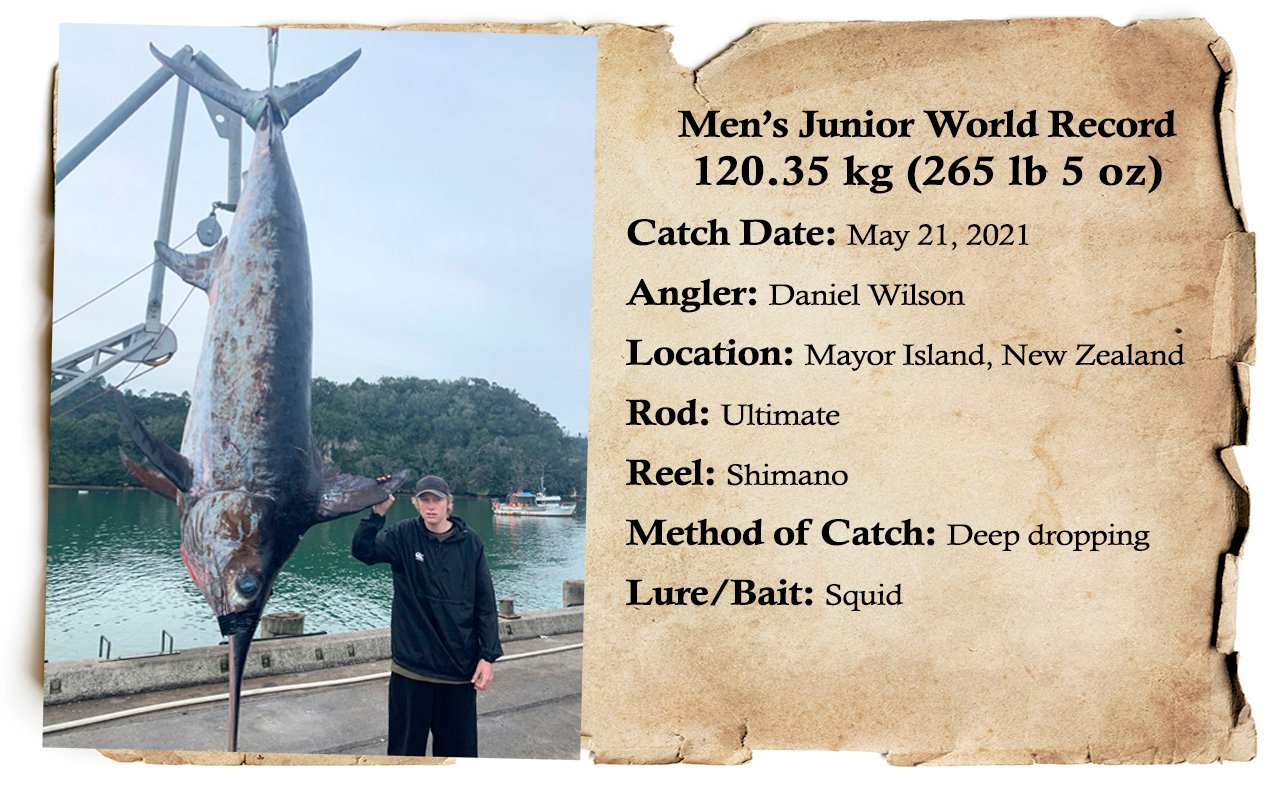 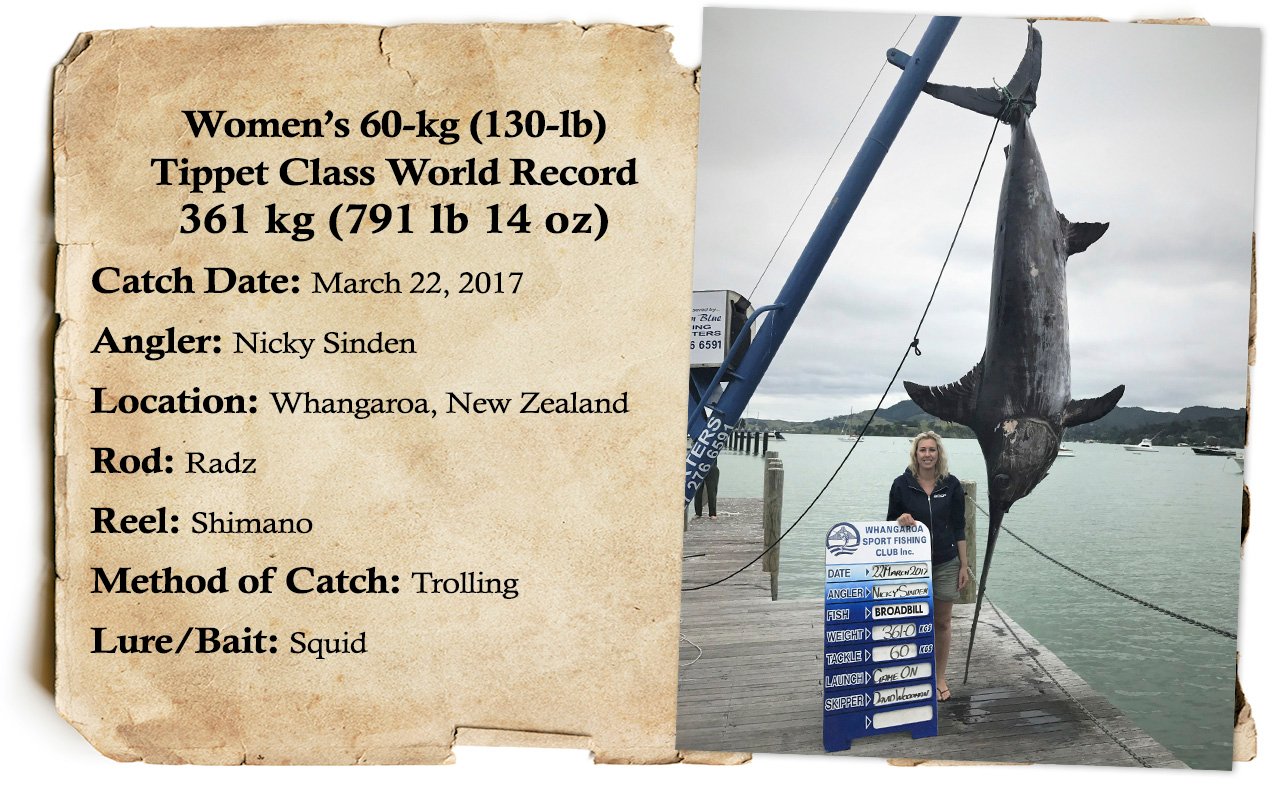 On March 22, 2017, Nicky Sinden caught the heaviest swordfish ever recorded by a female angler, setting the IGFA Women’s 60-kg (130-lb) Line Class World Record. "For this particular one, we didn't realize how big it was until we saw it jump,” said Sinden. “As its shoulders erupted out of the water I went, wow, it's a monster. We were just blown away.” She landed this amazing 361-kilogram (795-pound, 14-ounce) swordfish in roughly one hour after it ate the rigged squid she was fishing off Whangaroa, New Zealand. After the fish was boated, Captain David Woodman steered the Game On back to Whangaroa Sport Fishing Club for an official weight. This impressive swordfish catch bested the previous record, which stood for 65 years!

On April 9, 2012, New Zealand captain John Gregory and his deckhand Jim Gigger were the only two on the boat Primetime when they hooked into a giant swordfish while fishing off the North Cape Karikari area of New Zealand. That night, Gigger set the IGFA Men’s 37-kg (80-lb) Line Class World Record for swordfish with this giant 404.4-kilogram (891-pound, 8-ounce) broadbill. It took over an hour to land the record sword after it ate the skipjack tuna he was using for bait. “The fish took a large tuna we were drifting down deep and it sucked the bait right down into its guts,” Captain John said. “It gave one hell of a hard fight with massive head shakes that were just like riding a bull in the rodeo. The fish did a huge jump then went back down. One hour and 20 minutes later, we had her at the boat.” The fish measured 14 feet, 5 inches from the tip of the bill to the tail, with a short measurement of 10 feet, three inches, and a massive girth of 6 feet, 4 inches. 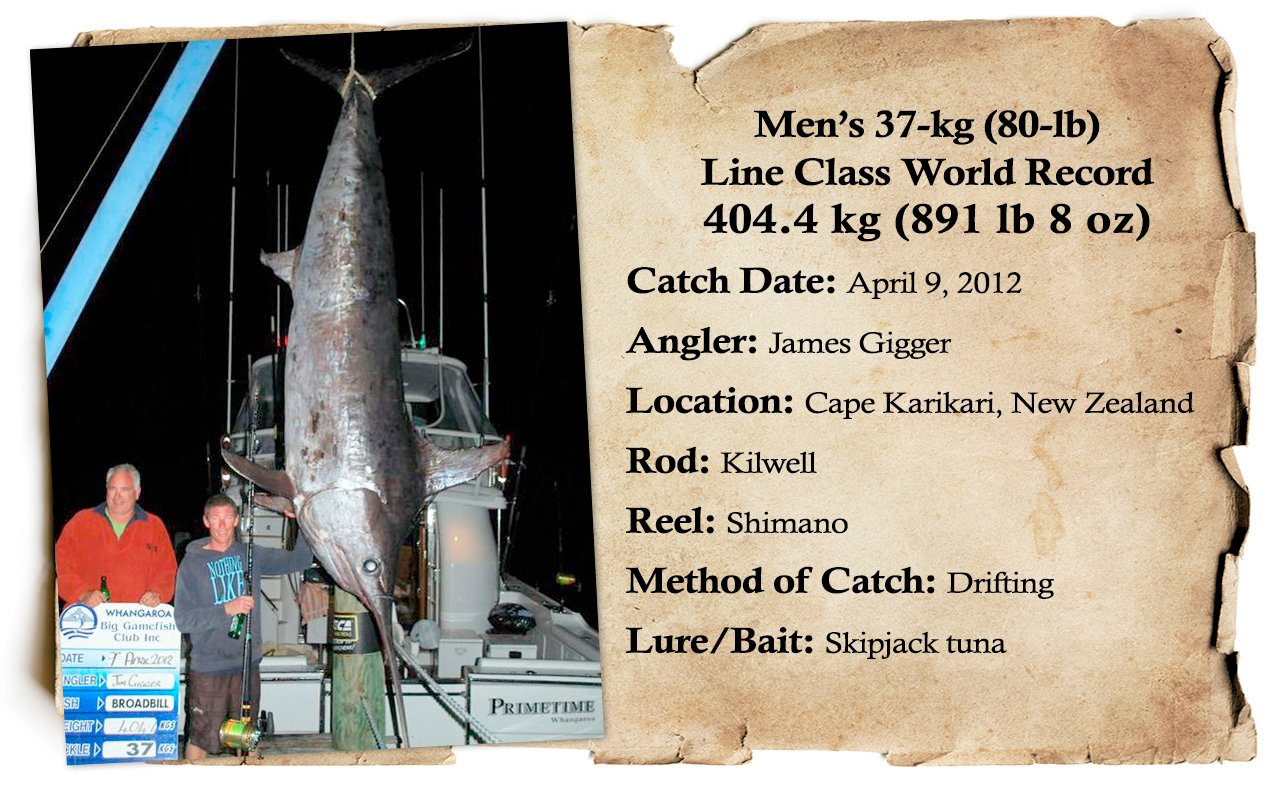