Talking tarpon with two giants of the sport

Tarpon are the largest of the “Big Three” species encountered on the flats in the western hemisphere, the others being permit and bonefish. They are beautiful, majestic animals—their silver scales can, at times, appear green or pink or purple, depending on where you are targeting them. The initial “eat” of a tarpon is such an otherworldly experience that it is nearly impossible to describe with words. (The poet, Richard Brautigan, perhaps came the closest to doing so, describing it as “immediate unreality.”) And they are one of the few game species that actually fight back—with spectacular leaps and violent, powerful runs—on terms that are, more or less, equal with that of the angler.

IGFA Fishing Hall of Famer, Tom Evans, 84, has spent a lifetime pursuing the largest of the species on fly. He is, by the book, the greatest big tarpon angler alive, having set seven IGFA tippet class records for the species. (Not to mention a handful of other impressive fly records on billfish.) Two of those records—a 190-pound, 9-ounce fish on 16-pound tippet and a 194-pound, 8-ounce fish on 12-pound tippet—still stand. To learn more about Tom Evans please watch his IGFA Hall of Fame Induction video.

Andy Mill, 69, is, by the book, the greatest tarpon fly tournament angler of all time, with seven total wins (five Gold Cups, a Don Hawley and a Golden Fly). The current IGFA Trustee is also perhaps the world’s greatest ambassador of the sport, as a gear guru and a public speaker, and as the author of the seminal book about the sport and its characters, A Passion for Tarpon.

Recently, we sat down to talk tarpon with these two giants of the sport. We discussed, among other things, their first experiences with tarpon, their favorite ways to target, what beguiles them about the species and what their “one last fish” would be.

Andy: I was filming an episode of Fly Fishing the World with John Barrett. We were at El Pescador Lodge, on a panga on the flat right out in front. I’d seen tarpon on Flip Pallot’s show, but never in person. All of a sudden, I see these things sliding around the boat. I threw a fly out and one of the tarpon comes over and opens its mouth and inhales it. I didn’t land that fish, but it felt like I had been struck by lightning and survived.

Tom: In my late 20s, I was fishing the Miramichi River every year, but the runs of Atlantic salmon had been declining. I read a story somewhere about tarpon fishing and decided to try it. I went down to the Keys and booked a guy named Harry Snow. On our trip, I hooked one and it flew out of the water. And then he was gone. That launching really got my attention. I then booked Jimmie Albright and we fished Long Key and I caught an 88-pounder. The next year, I called Snow to fish again. He said he was booked but that there was a kid across the street from him who had just started to guide for tarpon. I got the kid’s number and booked him. It was Steve Huff. That was it after that. Pure addiction.

Why do you love tarpon angling with a fly?

Andy: I love the hunting aspect. You’re hunting an animal with fins. I’ve caught a wide spectrum of fish, and, to me, the hunting aspect is paramount. I don’t want to be in the deep ocean hoping a fish finds me. I want to find the fish.

Tom: You’re sight-fishing for a fish that has all of the attributes you could ever desire. They’re beautiful and difficult and they provide a good dose of adrenaline. I wanted that kick. I’d played nose tackle in college, and the farther away I got from the football locker room, the more I needed the kick.

Traits of the best tarpon anglers?

Andy: The best anglers all have patience. It might take all day to find that one fish, and you have to be willing to wait. With tarpon, all of the nuances of being a great fly angler come into play. There can be no weak link. You have to see well, cast well, set the hook and be able to employ the rope-a-dope fighting tactics needed to subdue a large animal on light tackle.

Tom: A high threshold for pain.

Andy: I love the swimmers on the ocean side of the Keys, but laid-up fish are my favorite. You have so much time to assess how to approach them, trying to figure out the speed of the current, how deep in the water column they are, how to set up the boat, trying to figure out which end is the head. There’s so much foreplay. They are the hardest fish to catch and the most rewarding.

Tom: I like it how it used to be in the olden days, days that you had to be there to believe. In Homosassa on that white sand, looking a little to the west and seeing a big black chain of these things coming down the flats in seven to eight feet of water. And then standing up in the bow and picking out the fattest face and seeing if I could feed it.

Why is the work of the IGFA important?

Andy: On the conservation side, our resource and habitat are declining because of population increase and development. We may not be able to stop those things, but we can slow them down through the work of the IGFA and Bonefish & Tarpon Trust. It’s important to save these species, not only for us personally, but for our hearts and our stories. And it’s important to keep world records, not just for the record, but because of the steps taken to catch that record. The journey has refined our skills, our gear. The challenge has evolved the sport.

Tom: The IGFA sets the standards and the rules, just as there are standards in the sports of golf and football. Without those things, what do you have?

How do you prepare for a tarpon season?

Andy: About two months before the season, I spend days tying knots. I practice casting in the park, testing new rods. I love to cast and watch the fly line go through the air. Back in my tournament days, I set up a pulley system with weights to figure out how hard I could pull on tippets, so my body could learn the feel. During all of that prep, I am fishing through my mind. I’m not fishing, but my mind is already on the water. 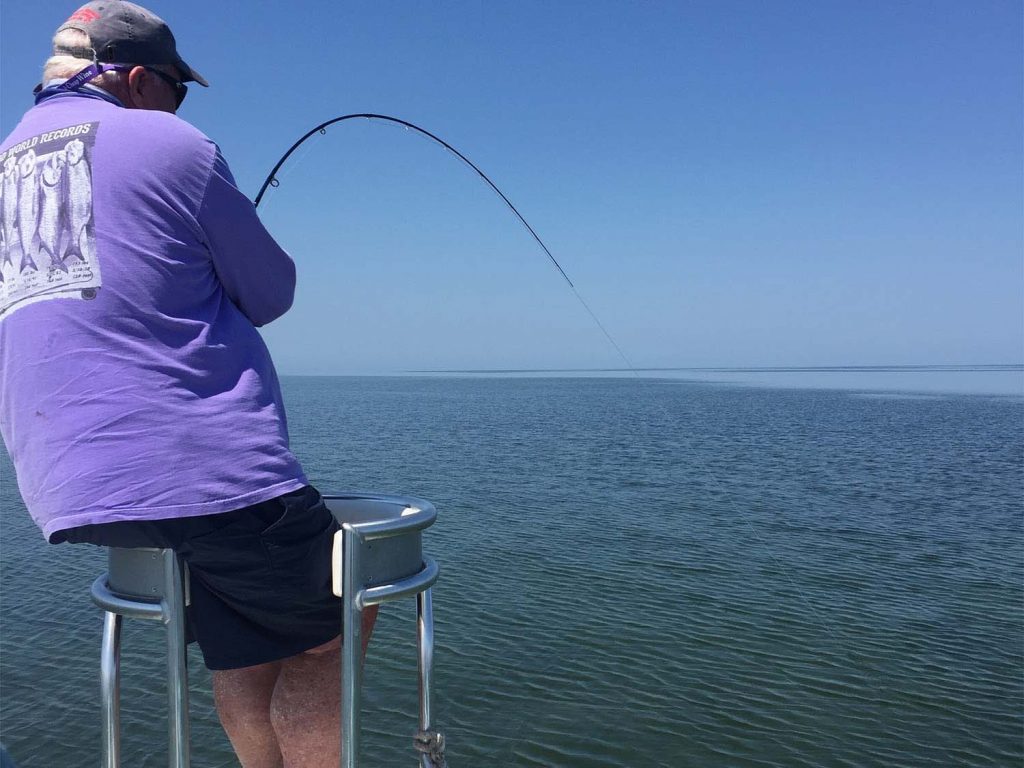 If you had one last fish to go after, what would it be?

Andy: Although I’ve spent decades perfecting my game to pursue tarpon, it would be wading for a tailing bonefish on a desolate flat. It’s such an organic and simple thing. The colors, the sea breeze, the falling tide wrapping around your ankles. Just you, the sea, the sky and the fish.

Tom: The poon. On the white sand of the Oklahoma flat at Homosassa. Nothing in the world beats it.