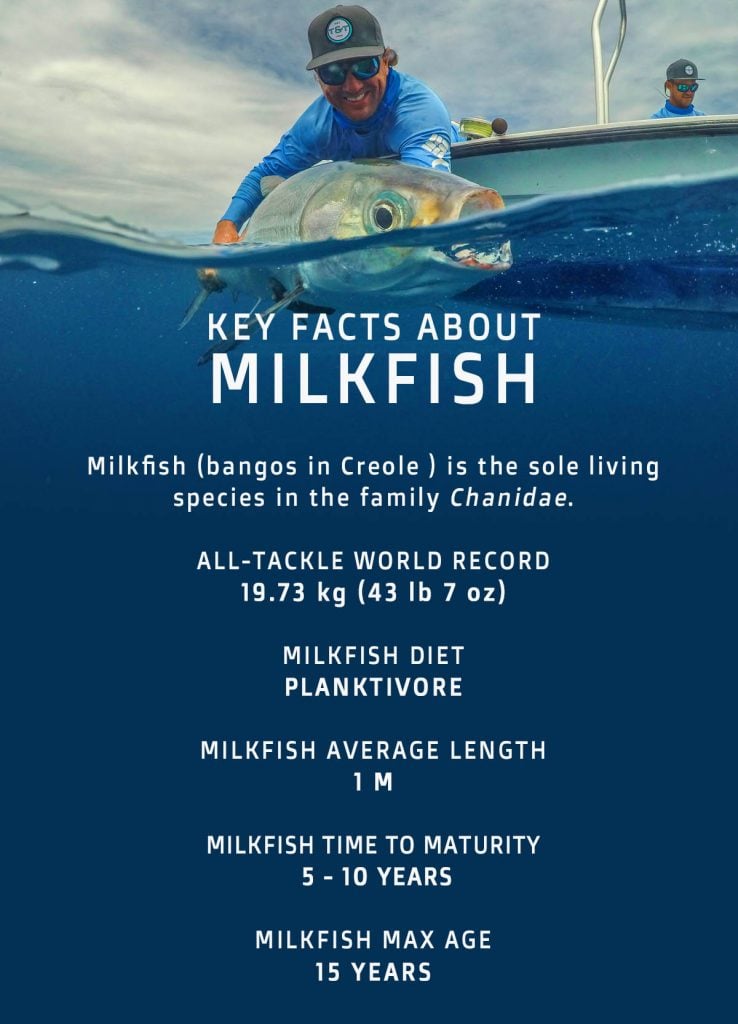 Milkfish, also known as Chanos chanos, is a challenging and hard-fighting opponent. The origins of targeting this species on the fly stems back to Alphonse Island and the lagoon of St. François where these techniques were first pioneered and developed. Milkfish is one of the dream, or perhaps a nightmare, game fish for fly anglers visiting Alphonse Island. Known as the fish of a thousand casts, just hooking a milkfish can be a major undertaking.

Combined with that, they have an incredible power to size ratio, and provide spectacular aerial leaps, meaning that any angler that manages to land a milkfish on the fly should be very proud.

"All IGFA World Record categories for the species remain vacant except for the All-Tackle World Record, a 19.73 kg (43 lb 7 oz) fish which was landed along the coast of El Salvador in 2012."

The IGFA added the milkfish to Line Class, Tippet Class and Junior/Smallfry record categories on May 1, 2019. Milkfish are also included in the list of species that comprises the IGFA Inshore Grand and Royal Slam Clubs. Since it was added as a new eligible species, all IGFA World Record categories for the species remain vacant except for the All-Tackle World Record, a 19.73 kg (43 lb 7 oz) fish which was landed along the coast of El Salvador in 2012. This is partly due to little being known about the species as it is not commonly targeted as a game fish. We hope this feature article created by our friends at Alphonse Fishing Company in the Seychelles will drive some much-deserved attention towards discovering this world-class fishery.

Milkfish are usually relatively easy to spot. When fishing on the flats in knee to waist-deep water, they can usually be found in small pods cruising over algae patches with their tails protruding out of the water like bonefish, as they feed on the bottom. When feeding in deeper water, they will swim to a depth where there is the greatest abundance of food. This can occasionally make them tricky to spot as they are swimming a few feet under the surface. For the most part, the fish can be seen making a bow-wake on the surface with their heads out of the water feeding at the top of the water column.

The most effective flies have been the Milky Dream, Wayne’s Milky Magic and the Olive Milky Dream with tungsten eyes. All of these flies have a few distinct similarities which help mimic the food source of the milkfish. 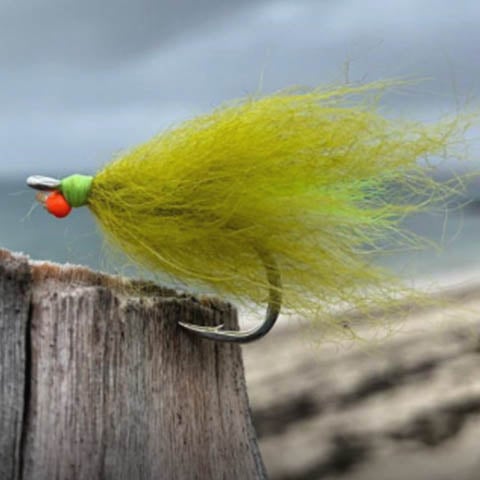 The Milky Dream is one of the most effective flies for milkfish. A combination of an olive, green and chartreuse body imitates the algae that the fish graze on. Often a couple of strands of crystal or UV flash are added to impersonate the copepods that live around the algae beds. A couple of wraps of pink chenille can also be put on the head of the fly to mimic an egg sac. 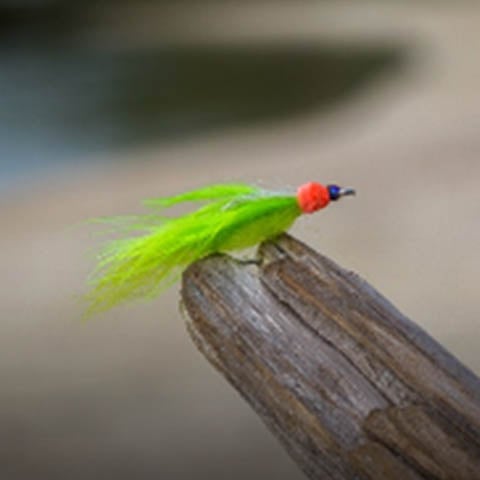 The Wayne’s Milky Magic is a simple fly to tie with a red chenille egg sac tied up front by the hook eye. This allows the fly to appear more enticing as the chenille represents the egg sack of a variety of crustaceans that reside in the algae, creating a more protein-rich meal in the eyes of the milkfish. 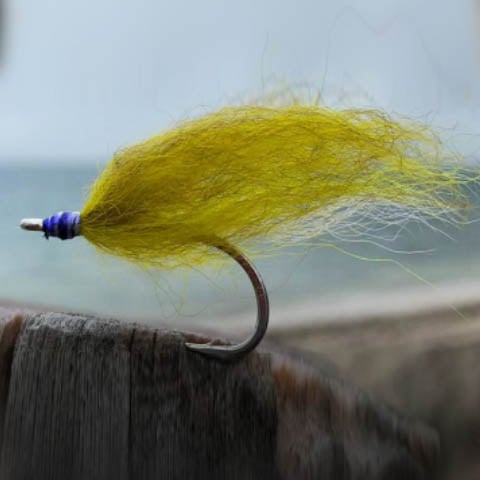 This is a very simple, yet very effective fly. The best hook to use is a Gamagatsu SL12S size 2. A small amount of olive colored lamb wool to imitate algae and a tiny pinch of UV crystal flash/angel flash to imitate various planktonic creatures is tied in at the front of the hook. Just before finishing, the addition of a tungsten bead is added to make the fly slightly heavier.

Fly fishing is considered the most effective style of fishing to target milkfish. It takes skill, patience, determination, and knowledge. Milkfish have a reputation for being one of the hardest fighters, if not the hardest fighter out of all the fish that are targeted on the Seychelles skinny water flats. Naturally you will want to have the correct rod that will match the power of the milkfish. Having a 10 or 11 weight rod will enable you to make a quick presentation as well as provide the pulling power necessary, when it counts.

Milkfish generally push up in the greatest numbers on neap tides. This is due to less water movement and disparity between high and low tide resulting in the flats being mostly covered with water throughout most of the day. This gives the fish a longer time to feed and provides a situation where they feel most comfortable feeding in skinny water. 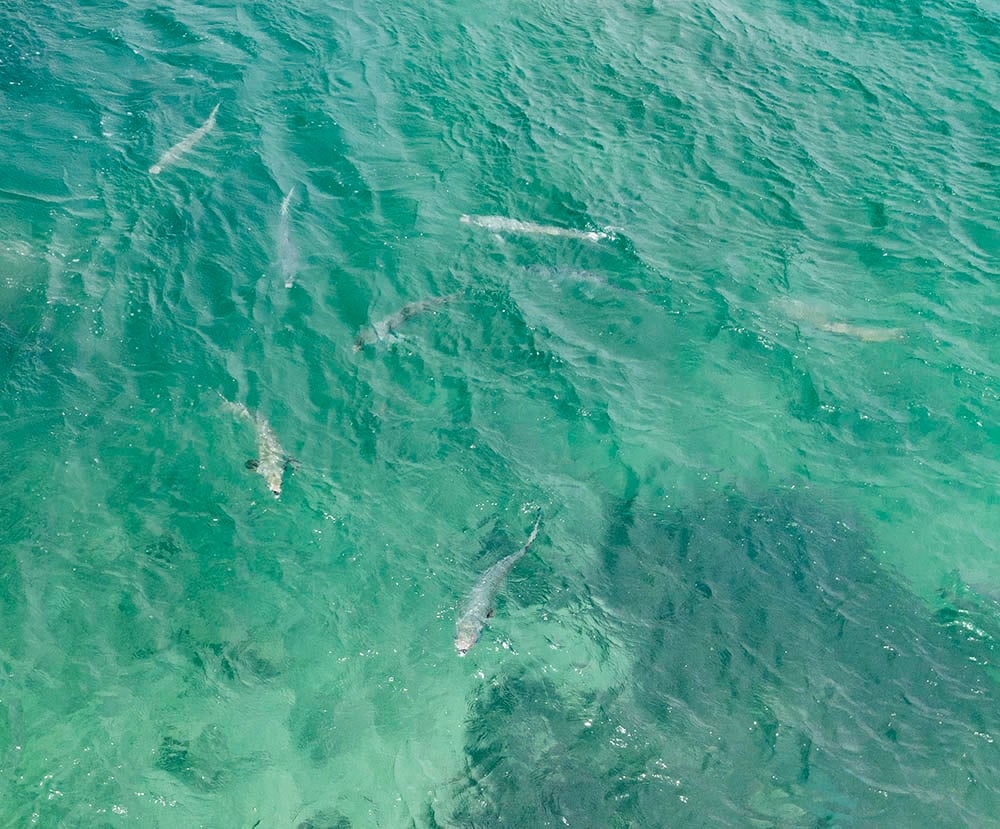 Milkfish usually congregate in schools during or just after a full or new moon as is the time when their food supply is abundant due to invertebrates spawning around the moon cycles.

During a spring tide cycle, the natural circumstances can also lead to the formation of a more pronounced scum line where plankton are concentrated, leading to a greater number of fish being found.

Approaching milkfish is very different from most of the flats species since they are not predatory and therefore the fly is not imitating anything trying to escape, but rather a stationary particle. Thus, fly choice is not dictated by the area that one fishes, but rather by the behavior of the fish whilst they feed. 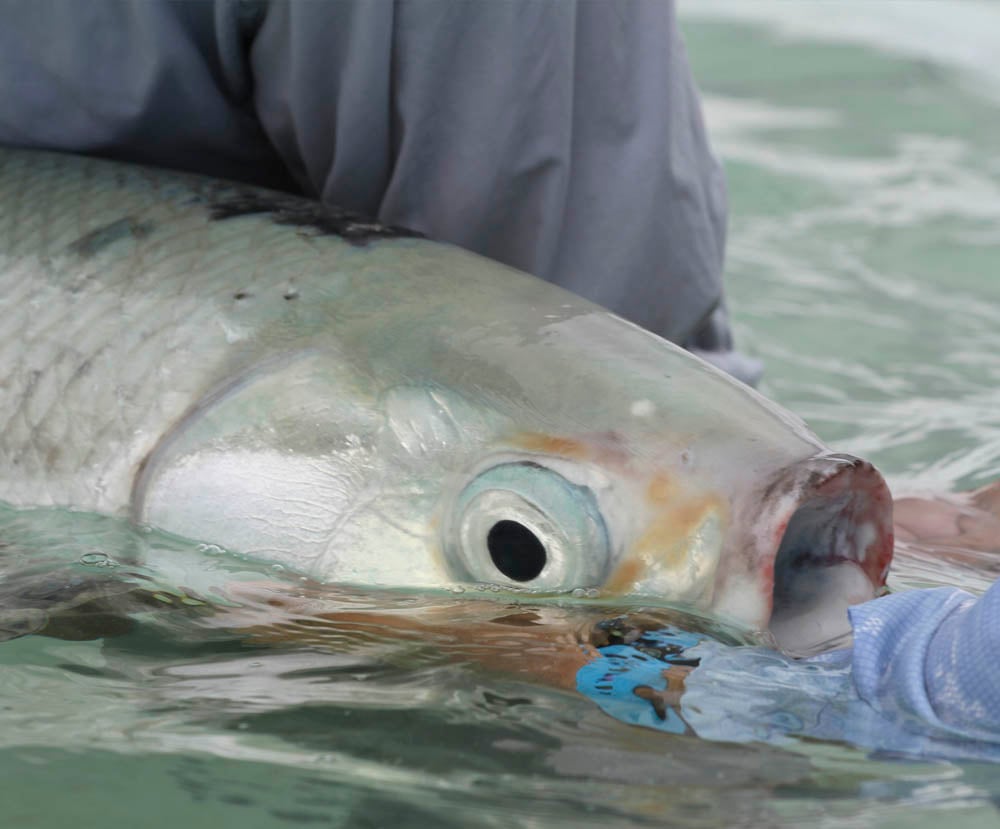 Upon finding a school of feeding milkfish, the positioning of the boat is very important. The ideal drift is to have the fish 90 degrees off the bow to cover as many fish in a single cast as possible. The fly placement is also crucial to ensure getting the fly to the correct depth. The key is to move the fly as little as possible; long, slow strips should only occur when slack needs to be taken out of the fly-line. If the line begins to move in the direction that the fish are moving, maintain a low rod angle and make several long strips until the line becomes tight.

WHY DO MILKFISH HAVE SO MUCH ENDURANCE DURING THE FIGHT?

A study was conducted thanks to a grant from the Alphonse Foundation, Alphonse Fishing Company, and Blue Safari, and in partnership with the Island Conservation Society, University of Massachusetts Amherst, Keep Fish Wet, and Carleton University. 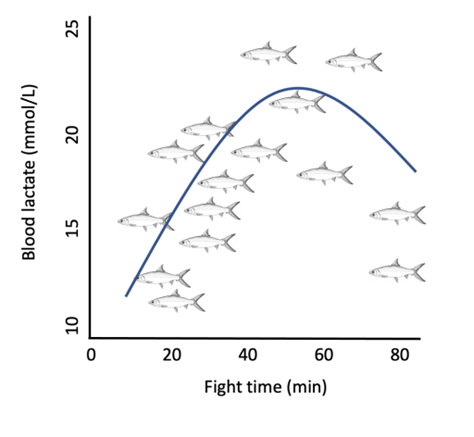 Every few months there is a post in social media remarking that milkfish (Chanos chanos) can fight for so long on the end of a fly line because they do not produce lactic acid.  Sometimes it’s even attributed to their diet, which mainly consists of algae.  Lactic acid is a byproduct of anerobic muscle activity and is what leads to muscles cramping up after strenuous exercise, ultimately making them harder to use (like when exerting yourself during a long running race).  This is a common physiological response in vertebrates (and has nothing to do with diet), so, as scientists, we were always quite perplexed by the notion that milkfish may somehow be an exception.  In general, understanding how fish physiologically respond to capture and handling is important, and a great step towards developing science-based best practices for catch-and-release.

Thanks to the grant from the Alphonse Foundation, Alphonse Fishing Company, and Blue Safari, a team of scientists from University of Massachusetts Amherst and Carleton University recently partnered up with Keep Fish Wet and the Island Conservation Society in the Seychelles to see if milkfish produce and build up lactic acid as they fight.  Lactic acid ends up in the blood as lactate (to metabolize or get rid of it) and is something that we are able to measure in the field. 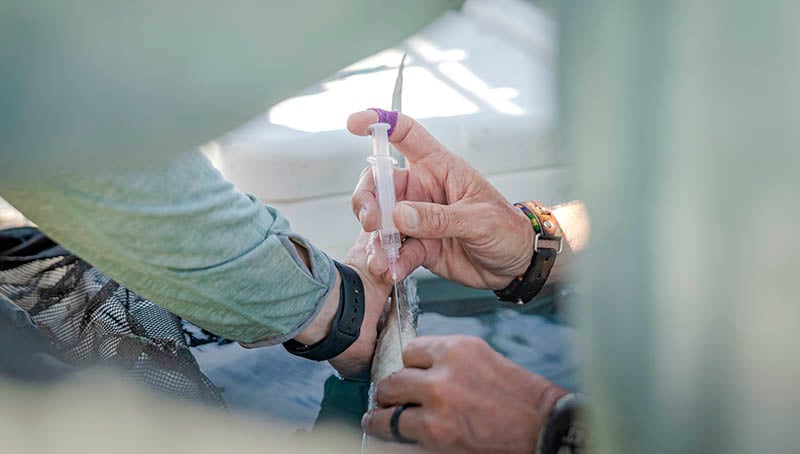 With the weather gods looking out for us and with ample milkfish working the scum lines of the outgoing tides just offshore of the reef crest of St. Francois Atoll, and dropping off the flats inside the lagoon, our collective team of guides and anglers managed to fight and land enough milkfish across a range of fight times to test this hypothesis.  Using non-lethal blood sampling after the milkfish were landed, along with portable blood lactate meters, we tested the blood for the concentration of lactate. 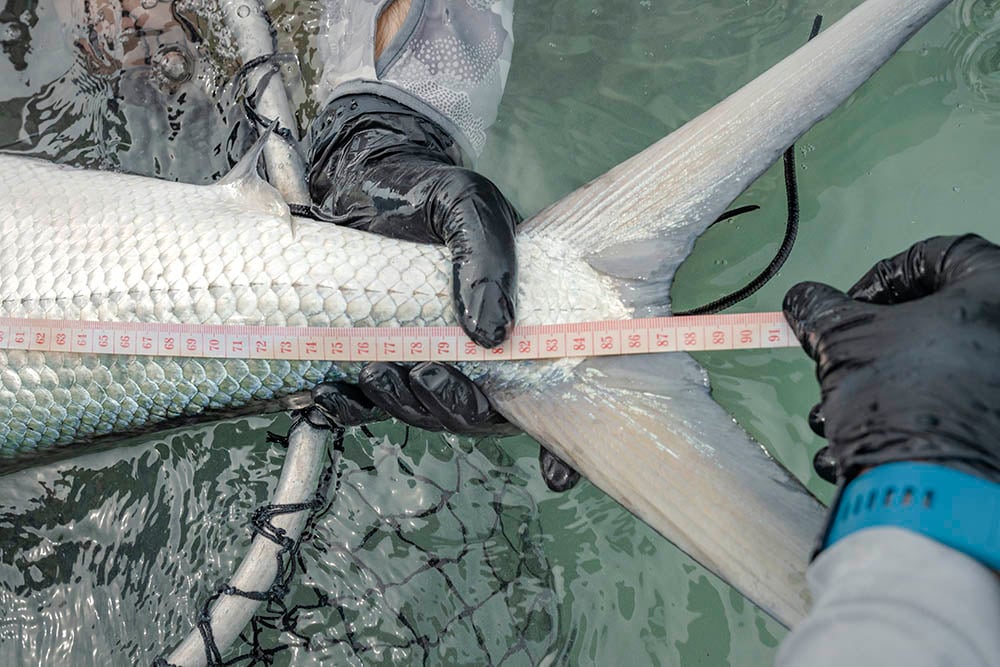 What this short study showed is that milkfish do build up lactic acid and blood lactate as they fight on the end of a fishing line.  Given that it did increase within the first hour, and that higher blood lactate levels can impair muscle activity and the potential for milkfish to get back to feeding on scum lines and avoid predators, we suggest that a species-specific best practices for milkfish would to be to keep fight times to less than 20-30 minutes.  From our experience, even milkfish over a meter in length can be landed on 20-pound tippet in under 30 minutes, so increasing fly rod weight from 10 wt to 11 wt and working on your fish fighting technique will be essential to achieve this best practice.