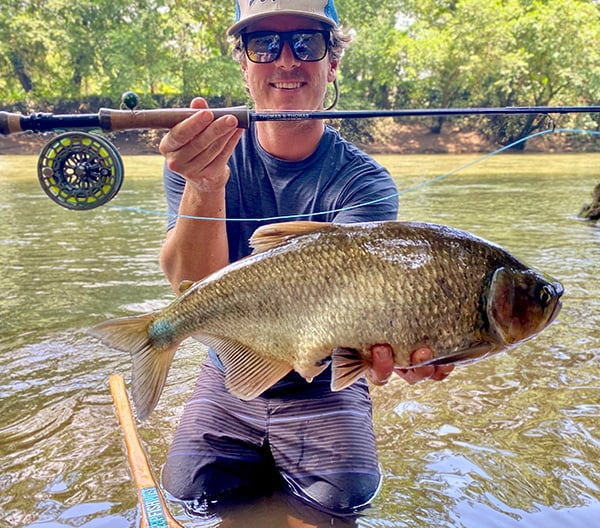 In March, the IGFA introduced three new species to be opened for Length, Junior, Line Class, and Tippet Class world record categories. Among the three introduced, was the species brycon, which has been opened as a “lumped” category where several different species are eligible for records under this genus. The response from anglers has been amazing, with several record fish caught including this quality 47-centimeter brycon landed on May 31, 2022, by Tom Enderlin, earning him the IGFA All-Tackle Length Fly World Record for the species. Enderlin was floating the Rio Sarapiqui in Costa Rica when this brycon struck his fly. After a brief fight he landed this record fish, which he quickly documented and released alive. Congratulations, Tom on an amazing record! 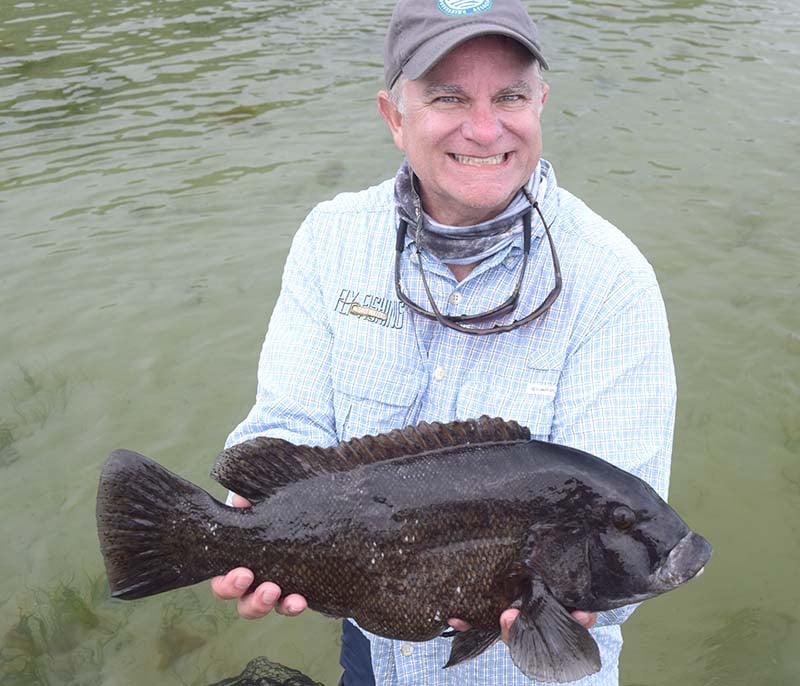 On June 4, 2022, Gary Jennings was fly fishing the flats around Fisher’s Island, New York, when he landed this uncommon sought species on fly, a 2.72-kilogram (6-pound) tautog.  Gary was fishing aboard Finaddict Fishing with captain Craig Cantelmo and they purposefully set out to  catch the fish with a crab fly tied by Captain Craig and on 4-kg (8 lb) tippet.  The duo then went to work documenting the proper measurements of the tautog and weight before releasing the fish safely. Jennings earned the IGFA Men’s 4-kg (8 lb) Tippet Class World Record for the species and we congratulate both Gary and Craig on an incredible accomplishment. 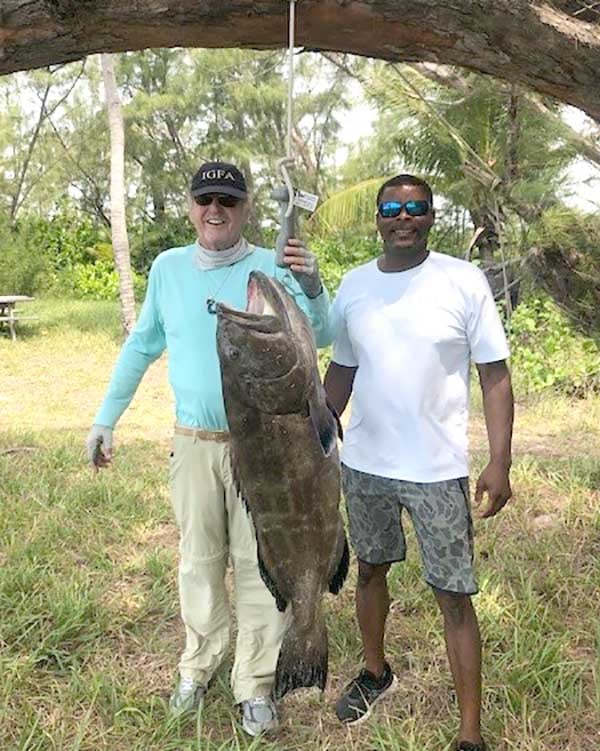 IGFA Chairman, Roy Cronacher, was fishing out of Green Turtle Cay in The Bahamas on May 7, 2022, when he landed this impressive 18.96-kilogram (41-pound, 12-ounce) black grouper. With this fish, Roy set the IGFA Men’s 10-kg (20-lb) Line Class World Record for the species. He was fishing aboard Empty Pockets and landed his record grouper after a 23-minute battle. Roy then returned to Manjack Cay for an official weight on his certified scale. Congratulations on an amazing fish, Roy! 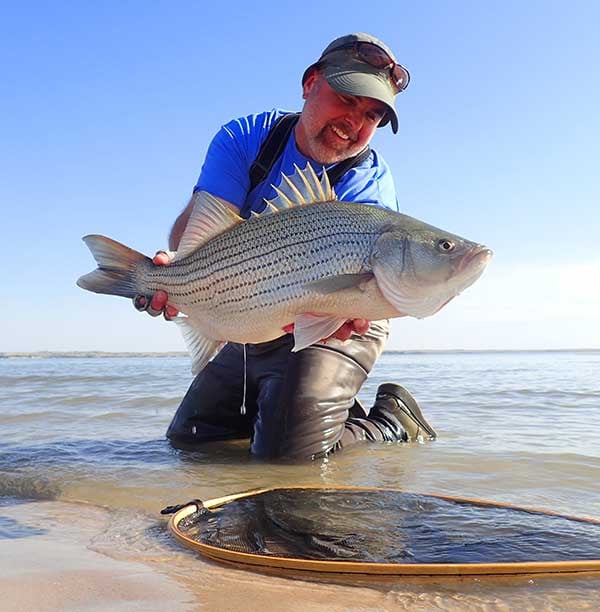 Lee Novotny submitted this impressive 63-centimeter whiterock bass to set the IGFA All-Tackle Length Fly World Record for the species. On May 11, 2022, Lee was fishing Lake McConaughy, Nebraska, when this record fish struck his “sparkle minnow” fly. After a 13-minute fight, he landed this beautiful bass which he quickly documented and released back into the lake. Congratulations, Lee on an amazing record! 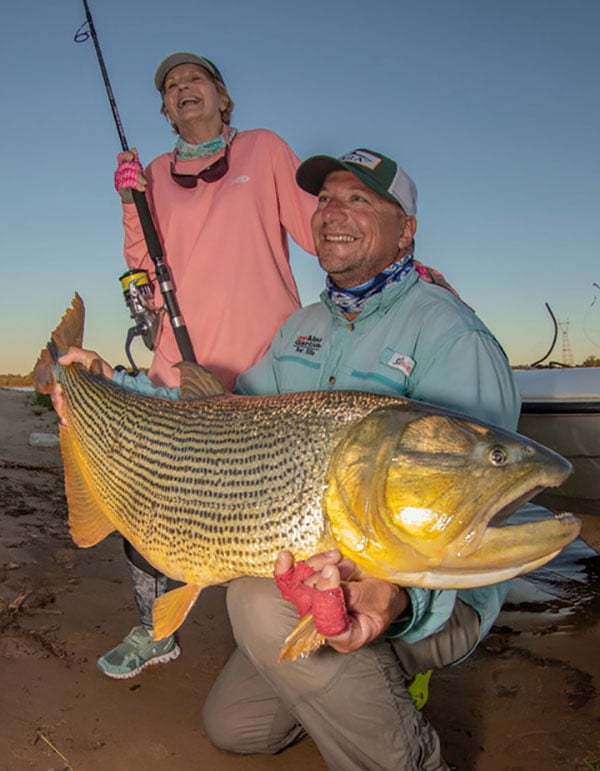 On March 13, 2022, Sherrell Carter landed this 14.06-kilogram (31-pound) dorado to set the IGFA Women’s 6-kg (12-lb) Line Class World Record for the species. Sherrell was fishing with guide Elbio Bordon aboard the La Zona V, in the Uruguay River, Argentina, when she landed this impressive dorado. After recording the weight on a certified scale, she released the fish safely back into the river. Along with this fish, Sherrell also set two more IGFA Women’s Line Class World Records for dorado on this same trip. Congratulations, Sherrell on an incredible fish and a very successful trip! 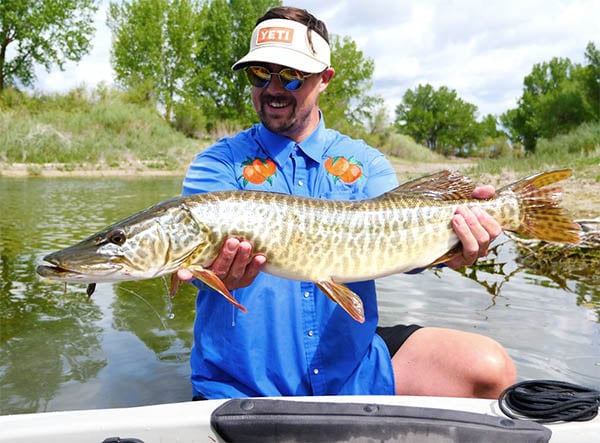 On June 5, 2022, Rob Mackesey was fishing the Newton Reservoir, Utah, when he landed this beautiful 79-centimeter tiger muskellunge. With this fish, Rob set the IGFA All-Tackle Length Fly World Record for the species. He was using a “musky streamer” when this fish struck and he landed the record tiger musky after a short fight. After recording the proper measurements on his official IGFA measuring device, he released the fish safely back into the reservoir. 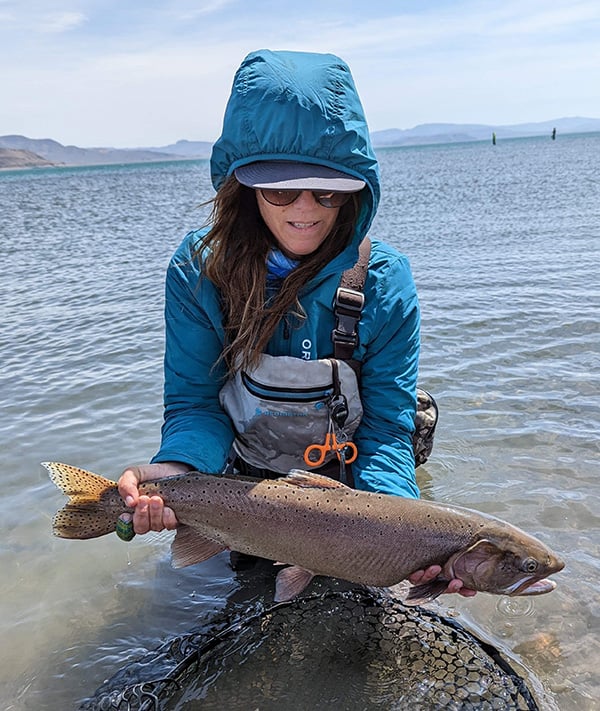 On April 18, 2022, Jennifer Felkins caught this gorgeous 4.24-kilogram (9-pound, 5-ounce) cutthroat trout to set the IGFA Women’s 8-kg (16-lb) Tippet Class World Record for the species. She was fishing Pyramid Lake in Nevada, US, when this fish struck her popcorn beetle fly. Jennifer landed this record trout after a four-minute fight and released the fish after recording the weight and properly documenting the catch. Congratulations, Jennifer on an impressive record catch!