A breakthrough article was recently published in the journal Diversity and Distributions by our IGFA Great Marlin Race partners at Stanford University. The article, titled, “Global habitat loss of a highly migratory predator, the blue marlin (Makaira nigricans)” uses IGFA Great Marlin Race tagging data to examine how suitable habitat for the species is changing with the climate.

The team from Dr. Barbara Block’s laboratory at Stanford, including first author Dr. Jonathan Dale, built a complex statistical model to estimate suitable habitat for blue marlin on a global scale, using satellite tagging (Table 1) and environmental datasets from 2000-2017. They then evaluated the trends in habitat suitability over time, creating monthly estimates of low and high suitability. They found the most important environmental drivers of blue marlin behavior to be sea surface temperature, sea surface height, oxygen at 100 meters depth, bathymetry, total kinetic energy, and chlorophyll, among others.

Suitable habitat for blue marlin was found to span equatorial and temperate regions between 40o North and 30o South (Figure 4a from article). The study found that highly suitable habitat significantly declined over the course of the study with 96% of core habitat experiencing declines. These declines were most prominent in the North Atlantic, Indian Ocean, South Pacific east of French Polynesia, and east of Japan. In contrast, the suitability of marginal habitat increased over the study mostly at the edge of the habitat range in the North Atlantic and Pacific due to the faster rate of warming occurring in the northern hemisphere compared to the southern. 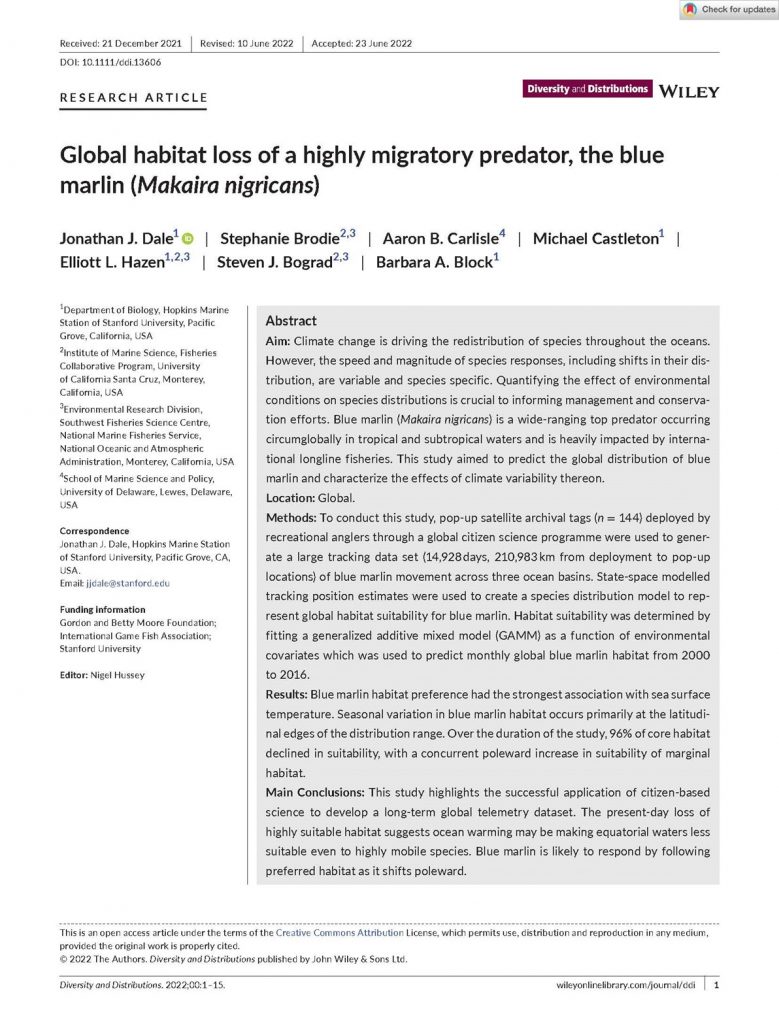 Poleward expansion of fish species’ range is a popular topic among fisheries scientists as the ocean warms and favorable habitat shifts along with fisheries that target these species. Because of the rapid changes happening to our oceans and fish stocks, studies such as this are critical to understanding how blue marlin will continue to adapt as equatorial waters become less suitable. Studies such as this will also help predict interactions with fisheries that catch blue marlin as bycatch, allowing for more dynamic international management of blue marlin stocks.

The IGFA would like to applaud the team at Stanford for developing this informative and impressive study, and we look forward to adding more tagging results to the database through the IGFA Great Marlin Race to continue to better understand these incredible fish.