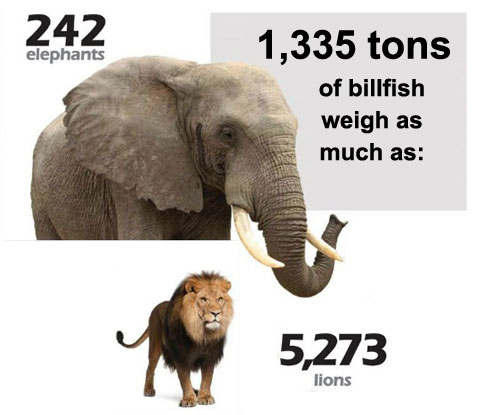 Concerned about the health of billfish fisheries, the IGFA and the National Coalition for Marine Conservation (now Wild Oceans) joined forces in 2008 to create the Take Marlin off the Menu campaign. They discovered that in 2006, the United States was the single largest importer of billfish species, bringing in 1,335 tons with a value of $5.2 million based on FDA customs clearances.

The first course of action was clear: the importation of imperiled billfish species had to be stopped within the United States. In just two short years, the campaign gained the support of such luminaries as Wolfgang Puck and the Wegmans Supermarket chain – as well as the attention of U.S. policymakers. Their support hinged largely on an Economic Analysis of International Billfish Markets, which showed that the economic value of the U.S. billfish trade is almost nil in relation to the rest of the U.S. commercial fishing industry.

This campaign culminated in passage of the Billfish Conservation Act of 2012.