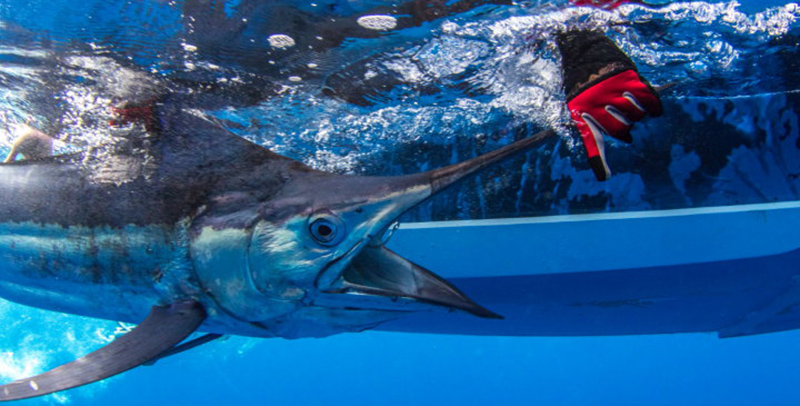 The International Game Fish Association (IGFA) celebrated the signing of House Bill 4528 into law  on Thursday, August 2, 2018. This legislation amends the Billfish Conservation Act (BCA) of 2012, by stating that no billfish can be entered into trade or sold in the continental United States.
Marlin, sailfish and spearfish (collectively known as billfish) are internationally revered by recreational anglers and produce significant regional economic benefits from catch and release fisheries, but many billfish stocks are in a depleted state. In 2007, the IGFA commissioned a study investigating the international billfish trade that found that the United States was the world’s biggest importer of billfish. This led to a collaborative effort by the IGFA and Wild Oceans to create the Take Marlin off the Menu campaign that ultimately culminated in the passage of the BCA, which banned the importation of billfish to the continental United States.
Once passed, however, questions arose over whether the same prohibitions on foreign-caught billfish imposed by the BCA would still allow billfish caught commercially in Hawaii and other Pacific territories to be shipped to the U.S. mainland, thus circumventing the intent of the law. The passage of H.B. 4528 and S. 396 closes this loophole by explicitly stating that billfish landed in Hawaii and Pacific Insular Areas must be retained there.
“This law solidifies the original intent of the Billfish Conservation Act in that no marlin, sailfish or spearfish are to be sold in the continental United States— regardless of where it is caught,” said IGFA Conservation Director, Jason Schratwieser.
S. 396 was initially introduced in February, 2017 by U.S. Senators Bill Nelson (D-FL), Marco Rubio (R-FL), Joe Manchin (D-WV) and Jerry Moran (R-KS) and was passed by the Senate in October, 2017. An identical House companion bill (H.R. 4528) sponsored by Representative Darren Soto (D-FL-9) was passed in the House of Representatives on June 25th, 2018.
“Wild Oceans and IGFA began the Take Marlin off the Menu campaign 10 years ago because we believe the future of these magnificent fish is not for sale,” said Ken Hinman, president of the conservation group Wild Oceans. “This simple ‘technical amendment’ ensures that billfish receive the full protection from commercial exploitation that the Billfish Conservation Act intended.”
This important amendment to the BCA advances the United States’ position as a leader in billfish conservation and sets an example for other countries to pursue similar conservation efforts to protect billfish stocks.