Francesca LaMonte was a founding member of the IGFA, a pioneer in marine research and one of the first women inducted into the IGFA’s Fishing Hall of Fame.

Recently the John F. Kennedy Presidential Library and Museum announced the opening of a collection of materials kept by Francesca LaMonte, a noted ichthyologist who helped found The International Game Fish Association (IGFA), worked as Assistant Curator at the American Museum of Natural History from 1920 to 1962, and was informally referred to as a “fish authority” for writer Ernest Hemingway.

The Francesca LaMonte Personal Papers collection joins over twenty other collections at the John F. Kennedy Presidential Library that contain some materials related to Ernest Hemingway’s work and life. For more information about how these collections came to the Library, check out their blog post.

This small collection consists of one file retained by LaMonte regarding an article by Ernest Hemingway titled “Cuban Fishing.” LaMonte solicited the article for a book on sport fishing that she was co-editing with Brian Vesey-Fitzgerald, published as Game Fish of the World in 1949. The papers include a typed manuscript (known as a “typescript”) for “Cuban Fishing” with handwritten edits by Hemingway, correspondence between LaMonte and Hemingway, two photographs of Havana, and the original file folder this material was housed in.

LaMonte spent her career performing extraordinary services for fishing as a scientist, author and editor, and founding member of The International Game Fish Association. Without LaMonte’s cutting-edge marine research and literary contributions, modern efforts to salvage habitat and preserve saltwater species would be set back untold years.

She also kept up an amazing number of professional affiliations with organizations such as the New York Academy of Sciences, the American Association for the Advancement of Science, the American Society of Ichthyologists and Herpetologists and the Society of Systematic Zoology. In 1930, LaMonte was a U.S. Representative to the XI International Zoological Congress in Padua, Italy. 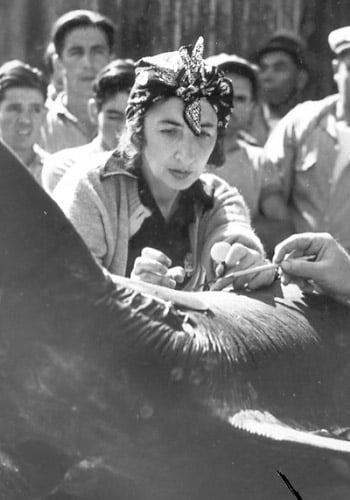 Lamonte was a woman whose enthusiasm for fish reached around the world. She spoke several languages and traveled extensively on expeditions with the AMNH. Among LaMonte’s most important achievement was the instrumental role she played in founding The International Game Fish Association in 1939. She was the IGFA’s first secretary and served in that role for 39 years, was appointed to the first executive committee, and provided invaluable service as editor for all of the IGFA’s early publications.

LaMonte was inducted into the IGFA Fishing Hall of Fame in 1998. Without LaMonte’s cutting edge research and contributions to the literature of marine science, modern efforts to salvage habitat and preserve species would be set back untold years.