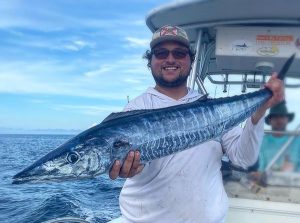 Born in Ottsville, Pennsylvania, Zachary Bellapigna grew up fishing the area of Cape May, New Jersey and has developed a strong passion for fishing. He received a Bachelor’s of Science in Environmental Science degree from Endicott College in Beverly, Massachusetts where he also played football. He then received a Master’s Degree in Aquaculture from the University of Miami Rosenstiel School of Marine and Atmospheric Science. Prior to joining the IGFA he worked for the University of Miami's Experimental Hatchery where he raised and cared for cobia, dolphinfish, hog snapper, and American red snapper among other species.  His fishing experience ranges from trolling for yellowfin tuna in the canyons of the Mid-Atlantic, to wild trout on fly in the mountains of western North Carolina, and most recently dolphinfish and wahoo on his center-console off South Florida.