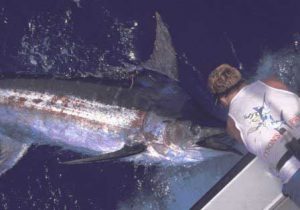 Johan Zietsman served as an IGFA Representative in Ghana, Africa from 1999 until he was appointed IGFA Trustee in 2018. Zietsman has helped with the approval of several IGFA world records for blue marlin, yellowfin and bigeye tuna in Africa. Since 1990, he competed in numerous professional billfish and International Light Tackle Tournament Association (ILLTA) tournaments globally, and became a Masters Invitational Tournament Angler in 1998. Zietsman pioneered Ghana, Africa’s Blue Marlin Fishing Charters which made global headlines with 950 blue marlin released with an average weight of 600 pounds over a five-year period with an average of two boats fishing a day.

Zietsman, a former Naval Officer, served as a South African diplomat across Africa for 16 years. After resigning, he entered the real estate investment industry and developed shopping malls, casinos, gold mining operations along with offshore oil and gas support service companies. He has lectured on International Real Estate Investment and Development at Johns Hopkins University Master of Science class in Washington DC, USA.

Zietsman has caught seven blue and black marlin over 1,000 pounds and 30 marlin over 800 pounds, of which most were released. He has written multiple articles on blue marlin, yellowfin and bigeye tuna fishing techniques in the IGFA World Record Game Fishes book. As Trustee, in 2021 he was instrumental in the IGFA obtaining the prestigious United Nations Environment Programme (UNEP) accreditation. Zietsman is committed to helping set up the IGFA's Regional Councils across Africa, to promote ethical sport fishing, and the conservation of marine and fisheries resources across the globe.