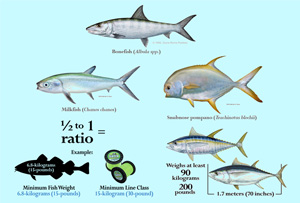 “For 80 years the IGFA has recognized outstanding angling achievements and set the standard for angling rules and world record catches,” said IGFA President Nehl Horton. “With the addition of these exciting new record categories and angler recognition programs, and the clarification of our world record requirements, we will continue to make participation in the IGFA’s angler recognition programs more accessible and understandable to anglers around the world.”

Effective May 1, 2019, IGFA will begin maintaining separate Atlantic and Pacific record categories for bonefish (Albula spp.) in the same way that it does for snook (Centropomus spp.).  With at least 11 different species of bonefish found worldwide, this will provide more opportunities for anglers to pursue world record catches of this iconic game fish. Current bonefish records will be reassigned based on where they were caught to reflect these new categories.

Two new species will be added to Line Class, Tippet Class and Junior/Smallfry record categories: snubnose pompano (Trachinotus blochii) and milkfish (Chanos chanos).  Both species are highly sought after by anglers in the Indo-Pacific region and will also comprise part of the new IGFA Inshore Grand and Royal Slam Clubs.

Historically, the IGFA’s Inshore Grand Slam Club has included four species: bonefish, tarpon, permit and snook.  To make this popular club more accessible to anglers around the world, the IGFA has expanded this club to include the following species:

Effective May 1, 2019, IGFA will add two new opportunities to its prestigious Trophy Club program. Any angler who catches a bigeye tuna (Atlantic or Pacific) or a yellowfin tuna fishing in accordance with IGFA International Angling Rules that weighs at least 90 kg (200 lb) or has a fork length of at least 1.7 m (70 in) will qualify for one of these new trophy clubs.

Effective May 1, 2019, the minimum ratio for world record catches will be set at ½ to 1 for all Line and Tippet Classes.  Under this requirement, the weight of the fish must be at least half as much as the Line or Tippet Class that it qualifies for based on pounds.  For example, a fish entered for a 15 kg (30 lb) Line Class record must now weigh a minimum of 6.8 kg (15 lb).

Effective May 1, 2019, the IGFA has also made changes to the IGFA’s World Record Requirements to ensure that they are consistent with the internal record review process and to reduce its risk and potential liability in relation to third party promotions involving world record catches.

Importantly, these changes include the elimination of the requirement that to qualify for an All-Tackle world record, “the fish must be a species commonly fished for with rod and reel in the general area where the catch was made.”

“Eliminating the requirement that a species is ‘commonly fished for’ makes it clear that the IGFA welcomes world record applications from anglers who are passionate about catching lesser known or exotic species,” said Horton.

Effective May 1, 2019, the IGFA has also amended item 3 of its Record Catch Regulations to clarify that, “The IGFA will not recognize or approve any IGFA World Record application where a financial award is offered for obtaining the record.”

Founded in 1939, The International Game Fish Association is a nonprofit organization committed to the conservation of game fish and the promotion of responsible, ethical angling practices through science, education, rule making, record keeping and recognition of outstanding accomplishments in the field of angling.