[email protected]
Mako Charters
11 Abri Lane
Spanish Point
Pembroke HM02
BERMUDA
441-295-0835 (Bermuda)
www.fishbermuda.com
Mako Charters has moved up to a 65 ft Hatteras. Built in 2004 she has just had a major refit and is ready to offer VIP charters throughout the Caribbean. We are based out of the beautiful Princess Hotel & Marina in Hamilton in Bermuda for June, July and August for the peak big blue marlin season, then moving south to St. Thomas and the Dominican Republic. Also offering live aboard fishing packages.

Ketchikan, AK 99901
UNITED STATES
(907) 204-0292
reelalaskafishingcharters.com
Captain Scott W. Edgar is a U.S.C.G Master Captain and owner-operator of Reel Alaska Fishing Charters. We are legally licensed for charter halibut retention as well as world class Salmon, Lingcod, Rockfish, etc. Based in Ketchikan Alaska, we push to remote locations as far as the Canadian border, up and around Prince of Whales Island to provide our clients with a rare opportunity well out past the local fleets to true unpressured world class fishing.

With 25 years fishing professionally worldwide, Captain Bertram Vachette is now a private yacht captain based in Fort Lauderdale, FL. He specializes in kite fishing for sailfish within sight of the beach, night sword fishing and fishing the beach and intercostal for tarpon. Additionally he is a captain-for-hire in the Florida Keys and tournament fishing in the Bahamas. 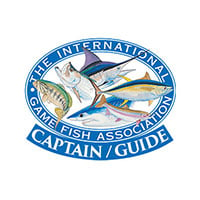 Captain Edward "Ed" Tapping offers full-service fishing charters out of Southwest Florida, from Venice to Cape Coral. Captain Tapping has decades of experience fishing both the inshore bays, estuaries and passes, as well as the offshore wrecks and bluewater fisheries off Southwest Florida.