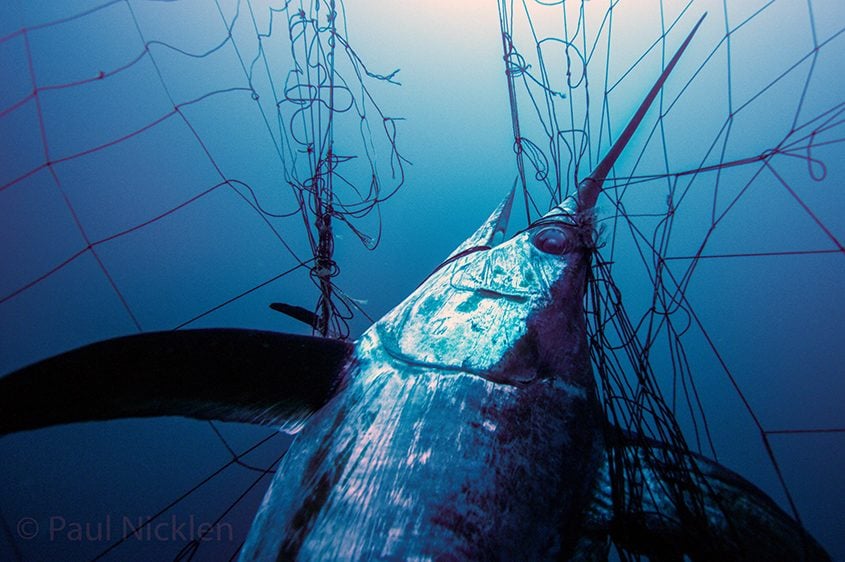 Historically, much of the swordfish harvested on the U.S. west coast came from drift gillnets. However, drift gillnets are extremely indiscriminate in what they catch and have an inexcusably high bycatch rate, and can entangle large numbers of other species in the process. How much, you ask? Well, this fishery consisting of fewer than 30 vessels kills more dolphins, porpoises, and whales than all other fisheries on the U.S. West Coast and Alaska combined. It was also responsible for killing marlin, bluefin tuna and other game fish that recreational anglers like to pursue.

There is a more sustainable, less destructive option: deep-set buoy gear.  The equipment consists of no more than ten individual or linked buoys, with vertical lines set at depths below 90 meters. This gear is fished during the day and, because lines are set below the thermocline, it specifically targets swordfish where they reside during that time.

Also, unlike drift gillnets and longline gear, deep-set buoy gear is actively tended. Once a bite is detected, the line is immediately retrieved, which has two benefits; first, swordfish are caught and iced quickly, resulting in a higher-quality product, fetching nearly double the market price of swordfish caught with traditional drift gillnets.

Additionally, any non-target species can be quickly released, increasing their chance of survival. Levels of overall bycatch are significantly reduced. During four years of testing deep-set buoy gear, swordfish have accounted for an astonishing 88 percent of the total catch.

To prevent the overcapitalization of this new fishery and minimize potential conflicts with recreational anglers in southern California, the PFMC will be authorizing deep-set buoy gear as a limited entry fishery. They will issue fifty permits to commercial anglers in the first year, and 25 additional licenses each consecutive year. The maximum number of allowed permits will be 300. There are also provisions for pausing the issuance of further permits if the PFMC determines that the fishery has become fully realized.

The IGFA has worked ardently on this issue for the last four years alongside Wild Oceans, the Coastal Conservation Association of California, the American Sportfishing Association, and the Pew Charitable Trusts. Authorization of deep-set buoy gear by the PFMC compliments a law passed in California last year that will ban the use of drift gillnets by 2023 by providing the commercial sector with an ecologically and economically superior method to harvest swordfish that benefits commercial fishers, recreational anglers, and the environment, alike